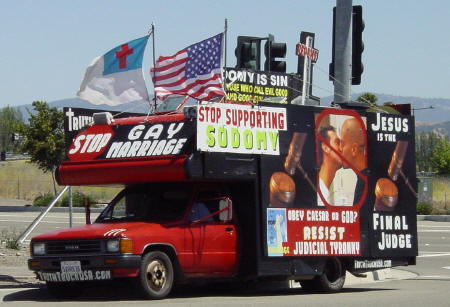 I was out today doing everyday things. Forking over money for car repairs, trying to find clothes my son will wear that don’t cost an arm and a leg, making lists for our family vacation, savoring a nice cup of coffee, that sort of thing, when I saw this vehicle parked all on its own. Obviously, it wasn’t from around these parts.

I was just minding my own business. Living life, doing stuff. Yet, the owner of the truck clearly hates me. Likely hates you, too. My mind is free enough from the clogged addiction of religious dogma, however, to know that as hateful as I find these messages, I know that judicial “tyranny” is why they can be displayed. 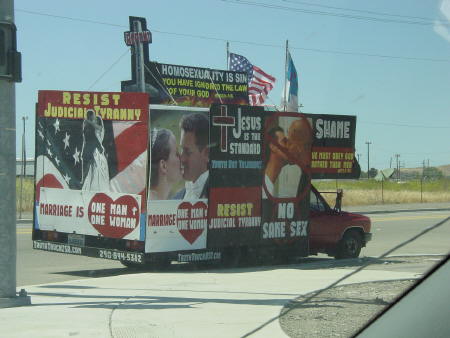 Since the Felps clan is in our area, I can only guess that this is one of their spawn. They probably dropped the vehicle off and car pooled to a nearby eaterie. I would have loved to have known where so that I could invade their day by doing something really GAY right in front of them, something that would have turned their stomachs. Why should I be the only person who needs an extra Pepcid?

Unfortunately, in the same vein:
She doesn’t have room to perform more marriages, so she’ll perform none…  Sorry, lady, nobody’s buying it. Apparently, it’s not okay to marry gay people, but it’s okay to lie about why. At least the hateful bigot who owns the truck is an honest hateful bigot. Of the two, the person abusing her authority and lying about why is far more dangerous.

Anyone who wants the full photos, which have phone number, license plate and URL plainly in public view, is welcome to them. Just drop me a note.