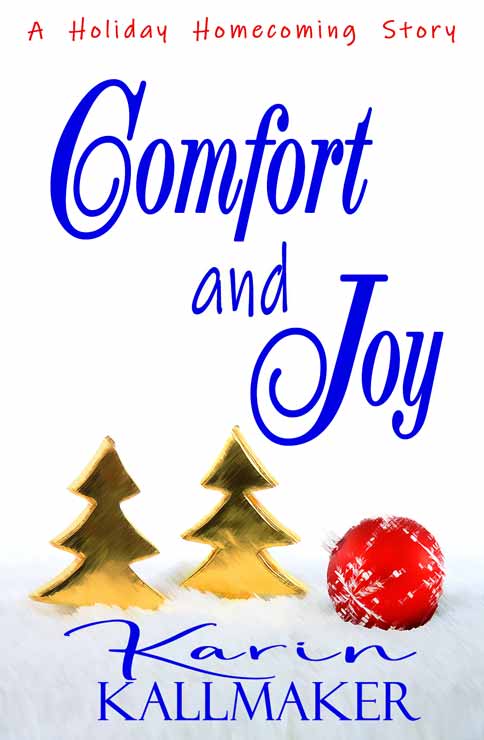 Home from Afghanistan to surprise her mother, Milla Zajac doesn’t expect more than the best apple pie in the world, the bliss of unrationed hot showers, and a quiet, peaceful hometown Christmas. She’s not counting on futures or meeting anyone special. At a chance first meeting on Christmas Eve, soldier Milla and pastor Tyna discover plenty of differences – and unexpected possibilities.

The opening scene of this story came to me all at once after hearing Ed Sheeran’s “The A Team.” I enjoyed writing this novella so much, including the research, and am grateful to servicemember friends who helped me get the details right. Anything that’s not right is my own doing.

But Lord Spellcheck, seriously, the Army spells it “duffel” and that’s how I’m spelling it. They know more about duffels than either of us.

One purchase unlocks all formats.

Search your favorite ebook site for "Kallmaker" - There's only one!

Here's a quick link to the author page at

Read by the author.

Karin's Store
What People are Saying...
Past and Present Covers 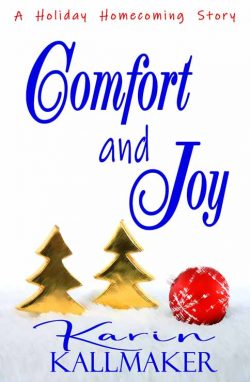 The quiet but close crunch of footsteps behind her made Milla turn around. For a moment, in a flash of sunlight, it seemed as if the white-robed figure was floating over the snowy ground toward her. She blinked the image away and the solid form of a woman emerged, one who was definitely leaving footprints in the snow. The robes were indeed white, but the sturdy, practical wool coat draped over her shoulders and heavy snow boots made her solid and real.

She stopped a few feet from where Milla stood. “I don’t mean to intrude, but are you okay?”

If the woman was past thirty it wasn’t by much. She can’t have been ordained long, Milla thought. Dark hair had been mostly pushed up into a knit cap similar to the ones Milla had worn every winter of her life, though she’d have never chosen bright red. She shivered slightly, aware that a world away a bright red cap was asking to be a sniper target.

Milla nodded, wondering if the pastor thought she might be a vet with no place to go. “Surprising my mom later. She thinks I’m home a week from now.”

A smile broke across the narrow face, lighting up the gray eyes. “How nice! You’re getting somewhere warm soon, though?”

In the last few minutes the snowflakes had gotten bigger and heavier. The champagne powder would be gone in a couple of hours and the pristine white roads would turn to slush. She looked down at Gracie’s grave. She wondered if Gracie’s mom ever visited — she’d tossed Gracie out of her life on two counts: drugs and being gay. What had seemed a gentle, purifying cover of snow now seemed unfeeling and sterile. No holly or ivy, no pine boughs. “My brother is picking me up in a while. He wraps up his last work shift soon.”

“I was going to get something hot — cocoa or coffee. Care to join me?”

For a moment she was annoyed at becoming some pastor’s rescue project but she was feeling the cold through her boots now. Her station gloves were worthless against the cold. She remembered where she was in time to hold back the casual “Fuck yeah” she’d have said to Brent. “I’d like that. Thank you. But one last thing I want to do.”

She set her patrol cap on the duffel at her feet, turned her back to Gracie’s grave and let herself fall into the soft, welcoming snow. Powder puffed up past her ears and settled on her face.

The pastor laughed. After Milla completed several prone jumping jacks, she helped her get up again.

Feeling a little foolish, Milla dusted snow off her short cropped hair and pulled her cap on again. “It won’t last, but Gracie would have liked it.”

“I am sorry for your loss.”

“A friend.” She hefted her duffel onto one shoulder and settled the weight across her back. “We were close before I enlisted.”

They walked toward the nearest gate out of the cemetery. “How long ago was that?”

“Two years and then some. I haven’t seen her since, and she was going places I couldn’t follow.” Just outside the gate was the Highland Presbyterian Church, a small building Milla had never had reason to notice before. “Is that one yours?”

“Yes. Small but mighty in the Lord,” she said with a smile. “It’s the unofficial church that goes with the cemetery, so when I see a service and have the time I like to step out and say a prayer as well. I’ve only been the pastor for four months, so we’ve yet to see if I’ll be a success.”

Noting that the Christmas Eve sermon was to be Love Thy Neighbor — Is that So Hard? Milla asked, “You’re Celestyna Gorski?”

“Sorry, that was rude of me.” Celestyna held out her hand as they walked. “Pleased to meet you…?”

“Milla.” She brushed her fingertip over the nametape on her ACU jacket before shaking hands. “Zajac, Specialist, United States Army Signal Corps. Your parents were thinking ahead with a name like Celestyna?”

“Absolutely. I was supposed to be a Catholic nun. Second-born daughter and all that, but I was called a different direction. Most people call me Tyna. Except for my grandmother.”

“I don’t think I could call you Tyna.” She waved a hand. “You’re all pastory and priesty.”

“You’re in uniform too, so it doesn’t seem quite right to call you Milla. I should call you ma’am, perhaps?” Tyna was smiling, clearly amused at the idea.

Tyna gave her a lopsided grin as they waited for the pedestrian light on the busy corner. “Milla it is then, so you have to call me Tyna.”

“What would your congregation think?”

“They call me Pastor Tyna, except for the members of the Auxiliary.” She waved an unadorned but elegant hand at her plain robes. “I normally don’t wear these except during services, but there was a dispute to settle with the decorating committee and the ladies only listen when I’m all pastory and priesty, as you say.”

“You set them straight?” Milla put out a hand to keep Tyna from stepping into the street as a late car pushing the red light roared past them.

“Thanks — I didn’t see that coming.” Tyna led the way across the intersection. “The last thing I can do with the Auxiliary is tell them what to do. That’s a fool’s errand. All I did was confirm that they were in fact referring to the correct minutes of the meeting in the summer where they planned out the ribbon colors for the flowers for all the holidays for the rest of the year. Yes, they had indeed chosen blue for Christmas Eve. Mrs. Stewart thought it was mocking Hanukkah and Mrs. Wubizcek felt it was a nice tribute to the pagan aspects of the season. I saw a funeral out the window and ran for it. Even now my phone is vibrating non-stop.”

“Well, that could be—” Milla stopped herself just in time. “The politics must be hard.”

Tyna gave her a sideways look as she veered toward the door to the Tim Horton’s. “What were you going to say?”

“What?” Milla tried an innocent look. It didn’t work on base, but stateside maybe it would.

“You were going to say that a constantly vibrating phone could be fun? Or, uh, interesting?”

Milla was glad her already ruddy cheeks wouldn’t show the blush she felt rising. She doffed her cap and tucked it under her arm as she negotiated her heavy duffel through the double doorways. “I don’t know what you mean.”

The hubbub inside the shop kept Milla from having to answer.