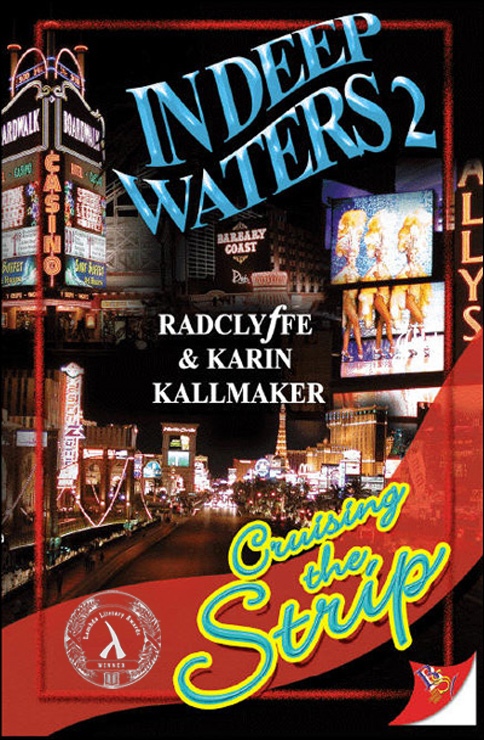 Games of chance, games of passion, games of love – roll the dice for a week in Las Vegas with games mistresses Radclyffe and Karin Kallmaker. Whether a public table or a back room invitational, the players want to score and everybody can’t wait to go all in.

A pit boss who thinks she’s seen it all thinks again. A convention planner finds hotel hospitality is on the house. Romance novelists discover that high stakes can yield to extreme passions, if they’re willing to call each other’s bluffs. The risks and rewards of Las Vegas inspire more than one couple to let it ride. Double down? Inside bet? How about a little insurance when the dealer has the upper hand?

Choose your game, ante up and enjoy the floor show. All bets are off when these two writers deal the cards, and every hand is a winner.

Radclyffe and I enjoyed spreading our worksheets so much the first time, we did it again. Excel and Erotica are like mashed potatoes and gravy.

Amazon USA
What People are Saying...
Covers Past and Present
Alternate cover art for this book 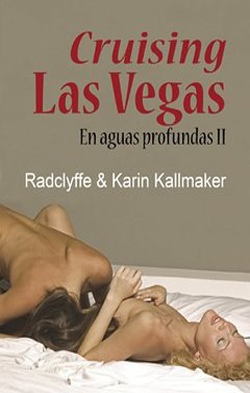 From “What Happens in Vegas…”

“Why are we here?” Marcie pushed her wild brown hair out of her eyes and squinted in the hot wind that blasted across the hotel parking lot. “What on earth possessed Nirvana and Sunshine to pick Las Vegas as the raffle prize? It’s…it’s…”

Keri counted the pieces of their luggage as the bags were transferred out of the limousine into the care of the bellhop. “It sold a lot of raffle tickets. You said it was twice last year’s sales.”

“It did sell a lot of tickets—and I guess I never thought I’d win. But now that I’m here, it’s so…so…”

“That’s a start.” Marcie turned her china-blue gaze to Keri. “It’s all fake, all for show.”

“And we get to spend five days and four nights as a part of the show.” Keri pulled Marcie along the curved entrance driveway until they reached the blissfully chilled lobby. “Thank you again for inviting me. I know some of your friends might have expected you to ask them, especially the ones who aren’t too sure about you dating me to begin with.”

Marcie relaxed once they were enveloped by the air conditioning. With a pleasing glint in her evocative eyes, she said, “You’re way more fun than they are. Especially late at night.”

Keri grinned and ducked her head. “I really try to make that true.”

“Will you look at this place? Incredible.” Marcie looked up at the massive atrium’s ceiling. “It’s like the Sistine Chapel.”

Opulent didn’t even begin to describe the Palace Hotel. Everywhere Keri looked there were rippling fountains or banks of exotic plants, lushly velvet cushions and elegantly dressed women ensconced on them. It felt like an oasis after the dry desert air.

Marcie had her denim jacket—necessary when they had left Syracuse that morning—draped over one shoulder. She gave an approving look to the row of orchids, but the gaze she turned to Keri was troubled. “This is a desert, and people all over the world are dying for water. Did you see those fountains?”

“I saw them.” Keri shrugged. After almost forty years of not giving a stale donut about other people, she’d gotten sober and realized her every thought and need was not the center of the cosmos. “I saw the endless building projects and I know there already isn’t enough water for the people who live here, let alone the new construction. You know how it goes—somebody really rich is going to have to lose a lot of money before anything changes.” Keri tucked Marcie’s hair behind her ear and was rewarded with a tiny shiver that zinged through her fingertips. “Meanwhile, this is the first time we’ve gone away together. So I suggest…”

Marcie smiled into Keri’s kiss. “I quite agree.”

A smiling woman in hotel livery bore down on them. “Welcome to the Palace, ladies! I’m Harmony, and I’m the V.I.P. coordinator this evening. I’ve just been informed you’re the winners of one of our Getaway Fundraising vacations. Congratulations—you are in for a wonderful stay.”

They were invited to “step right this way” and Keri smothered a laugh when Marcie did her best to imitate Harmony’s sassy walk. Keri had a decidedly unpolitically correct moment imagining Marcie in the high-heels that Harmony was wearing.

There had been a time—before dumping the flesh pots and booze of Manhattan for the ivory towers and sobriety of Syracuse—that Keri wouldn’t have been seen with a woman who wasn’t a high femme, including stilettos. There’d been a time when unfailingly practical, comfortably beautiful women like Marcie hadn’t registered on her radar. She’d liked young and aggressive, but now maturity and self-knowledge were turning her on like nothing ever had before. Sobriety had given her new eyes that saw deeper, and the world around her had blossomed into subtle colors of endless variety. Tech support in a college town paid far less than it did in Manhattan, but the other plusses were as good as money in the bank to her.

She’d already liked the pace of upstate New York when she’d volunteered to work in the collective grocery store. From the moment she’d met Marcie she’d been captivated by the steady, unwavering take-me-as-I-am manner. Marcie knew who she was, knew why she was here, knew why she laughed, why she cried. Keri was no fool—volunteering for several other of Marcie’s causes had led to their dating, which had led them here, to Las Vegas.

Keri didn’t want Marcie to change one single thing about her, so her sudden fantasy of Marcie in high heels was confusing. Maybe it was just old habits. After all, on the ride from the airport alone, they had passed dozens of images of buxom, mostly naked, long-legged women-as-eye-candy billboards. She couldn’t deny it: part of her had responded with, “Oh, baby.”

She couldn’t pull that attitude with a woman like Marcie. Marcie was nobody’s baby. But she surely did know how to move her hips. For a forty-something woman she was dead sexy, stilettos or not, and her sensuality was another thing Keri really liked about her. Used to be a tab of X and tequila shooters had been the only way to get turned on, but now she knew the miracle of a long bubble bath, slow touches, and lots and lots of kissing.

Harmony was showing various points on the map to Marcie. “Your vacation includes a salt massage at our spa for each of you. The spa is located here—” She tapped the map. “Just call to make a reservation. A romantic dinner for two has been planned for this evening, with a reservation already made for eight p.m. at Imperial, which overlooks the lake and fountains from the south.”

Marcie was better at remembering details, and Keri let her attention wander to the rest of the grand lobby. She had expected the discordant clanging of slot machines and the stifling stench of cigarettes, but only at the far end could she see the beginnings of a casino. Instead, the lobby seemed designed as an informal, well-lit place to relax and socialize. Three women in sensible shoes hauled heavy book bags off the ground and on to their shoulders as if girding themselves for more walking. Two had water bottles clipped to their belts, prepared for all eventualities. They disappeared in the direction of the conference center.

Several stunningly attired women entered from the casino, waved a greeting to an equally elegant and curvaceous female—in killer pumps—and the four of them turned toward the shopping concourse carrying nothing more than cute little handbags. Keri couldn’t help but watch after them.

As her gaze came back to the lobby she spied a handwritten board welcoming various conventions to the hotel. There were surgeons, writers, poker players, and librarians. But it was “Escort Services International” that caught her eye. The two voluptuous brunettes with gorgeous full hair styles and flawless make-up who lounged on one of the love seats as they chatted, well, they were not librarians. They might be a baby dyke’s wet dream about librarians, but that they were the escorts, and the water bottle carriers the librarians, was far more likely.

If she were a good lesbian, she would attempt to explain to the escorts that their profession was oppressive and they needed to cast off the shackles of the patriarchy, but damn they looked hotter than hell.

You’re in Vegas, Keri reminded herself. You don’t have to be a good lesbian here. She glanced over at Marcie, who looked incredibly fuckable, too. Her gaze slid on past to the two brunettes. You could be a very bad lesbian in Vegas. Trouble is, she told herself, going back to the far more pleasing picture that Marcie made, you’re falling for a granola lesbian, and that collection of toys you’ve got back home is going to go on collecting cobwebs and dust.

Their room key cards clutched in her hand, Marcie led the way to a bank of elevators. The bellhop, summoned by the ever-cheerful Harmony, patiently followed along. They were passed by a much faster moving couple—oo, Keri thought, more dykes—with an equally swift bellhop. Their high tech suitcases and leather bags were flawlessly matched. The medium-build, shaggy-haired woman was holding hands with a tall, caramel-skinned beauty in thigh-high boots and a short dress cut down the front to heaven. Their quick walk suggested they had an itch and were in a hurry to scratch it.

You’re obsessed with sex at the moment, Keri thought. Fancy hotel, Marcie looking adorable—get her into the room and get her naked. You’ll both feel better.

The power couple was long gone by the time a glass elevator arrived to whisk them up to the twentieth floor.

“Honey! Look at that pool!” Marcie gazed down at the lush, tropical grounds as they ascended upward. “Let’s grab our suits and go for a swim.”

It looked like the perfect setting for a Roman revel. Keri was starting to feel overwhelmed. She’d thought her one goal was to get Marcie into a hotel room, alone, and start their vacation off with a real bang. The pool looked…delicious. There were scantily-clad women lounging on chaises and for shame, for shame, Keri thought, she ought not be responding that way to such rank and obvious objectification. She thought of Marcie in a swimsuit and her composure got even more ragged.