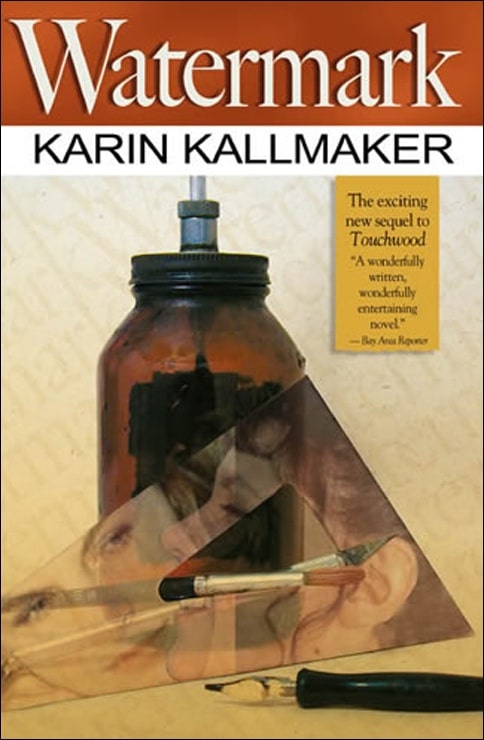 Teresa Mandrell‘s first encounter with advertising executive Rayann Germaine begins badly and goes downhill from there. Within minutes of their meeting, Rayann dubs Teresa a “bumbling amateur.” The event changes the course of Teresa’s life – she abandons the corporate world for what she hopes is a more satisfying career in Fine Arts Management.

When budget cuts leave her without work, Teresa lands a job as a design artist in another firm, only to discover that the new department head is… Rayann! But the difference in the woman’s demeanor is so startling that Teresa can’t believe her eyes. Although the woman she’d fought with had been insensitive and rude, there had been fire and passion too. This Rayann is cold and withdrawn.

To Teresa’s chagrin, the woman doesn’t even remember their fight. In fact, the two fall easily into an increasingly harmonious work relationship. As they grow even closer, Teresa slowly uncovers layer after layer of Rayann’s hurt and pain. When she at last arrives at the terrible truth, Teresa is left with one burning question: How can she turn Rayann’s heart away from grief and lead her back toward life and love?

Watermark is the sequel to Touchwood, and was written nine years later. The author humbly suggests that readers allow a lapse of time between the two novels, though perhaps not quite that long.


Fans of this book won’t want to miss the follow-up short story “The Tapestry” in Frosting on the Cake 1: The Original. 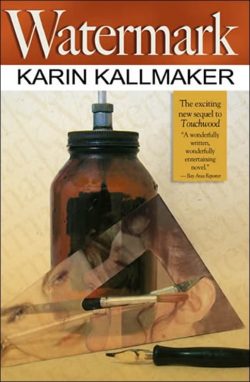 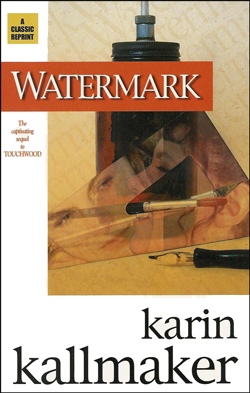 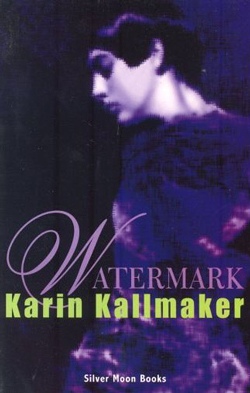 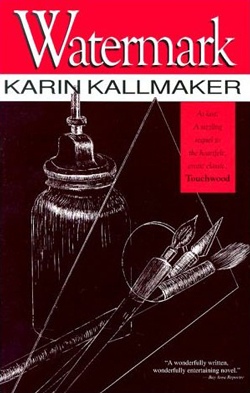 The two men on the other side of Rayann were getting hot and heavy. In a few minutes they left by the back door, which opened onto the alley behind the bar. Teresa slipped onto the deserted barstool next to Rayann.

The bartender brought Rayann another drink. Teresa leaned forward so he could hear her. “I’ll have one of those, too.”

It was a gin and tonic. Rayann didn’t look up from her contemplation of the glass until Teresa quite unaccidentally bumped her.

“Sorry,” she shouted in Rayann’s ear.

Two drinks later, all Teresa could think was, “This is stupid.” Rayann was deep into her own thoughts and two drinks ahead of her. Even if Teresa did get her attention, she was clearly in no condition to talk.

Did she really want to talk? No, all she wanted was acknowledgment. A look of recognition. Teresa realized the gin was having an effect on her own ability to think, but she was still clear on what she wanted. Rayann Germaine had delivered the cruelest insult of all–she had failed to recognize that Teresa was even there. She wasn’t leaving this bar until she had some satisfaction.

The bartender brought her another gin and tonic, but Teresa hadn’t ordered it yet. She waved it away, but Rayann signaled for it.

The bartender shouted over the music, “You driving?”

Rayann shook her head and then fished clumsily in her coat pocket. She held up a Muni pass.

The bartender shrugged and said, “It’s your last, then.”

Rayann managed to fumble her wallet out of her pants pocket and handed over a couple of bills to settle her tab. Teresa decided it was high time she did the same. Getting drunk was not why she was here. She pocketed her change and watched Rayann steadily drain the gin and tonic.

Last chance, she thought. Teresa leaned very close. Too close to be ignored. “Would you like to dance?”

Rayann’s eyes were half-closed, but she nodded. Teresa stood up, but Rayann stayed on her barstool, just opening her arms like she was going to dance while seated. Before Teresa knew it, Rayann’s head was nestled under her chin. She was tingling all over. It was a very nice kind of tingling, like she hadn’t felt in a long time.

“This isn’t quite what I had in mind,” Teresa said, more to herself than to Rayann.

Rayann looked up dreamily. “Just what did you have in mind?”

She hardly hesitated. In a heartbeat the desire was formed and acted on. She pressed her lips to Rayann’s, and when she found a soft and eager welcome, she intensified her pressure until Rayann’s lips parted.

A part of her, growing smaller by the moment, was not proud of what she was doing. But mostly she couldn’t stop. She changed her position, stepped between Rayann’s parting legs and cupped Rayann’s face in her hands.

When Teresa pulled away Rayann was gasping. Her eyes were closed, and she reached for Teresa again. “I’ve missed you.”

What the hell? She started to push Rayann back, but found Rayann’s hands inside her jacket, slowly pulling her blouse out of her skirt. “Don’t do that. Not here.”

Rayann smiled sexily and Teresa felt another jolt of desire. “Only your mouth is saying no.”

Teresa arched her back as warm fingertips found her bare skin. She remembered the door to the alley. “This way.”

Rayann followed, her step uncertain but eager. Once they were outside, she pulled Teresa against her so that Teresa had her pinned to the wall. Her mouth was like a fire of longing, burning Teresa’s lips and tongue. She was drawing Teresa’s hands under her sweater and in the next moment undoing Teresa’s blouse buttons.

Teresa wanted to go on, every part of her did. It would not be the first time she’d done something so stupid. But it seemed very wrong.

“It’s been too long,” Rayann whispered, and Teresa realized what was wrong. Rayann had no idea who she was, or rather, Rayann was drunkenly pretending she was someone else.

Her hands had found their way to Rayann’s full and soft breasts and Teresa’s resolve to end things before it went any further crumbled. Rayann’s fingers were inside her shirt, hurriedly fumbling their way under Teresa’s bra.

It felt too good to stop. The next kiss gave her vertigo and abruptly she found herself with her back against the wall.

“Your turn for once,” Rayann whispered. Her hands were under Teresa’s skirt now.

The warm pressure against her crotch was delicious, but it jolted Teresa to where she was. She grabbed Rayann’s arms. “We can’t do this here.”

“Take a walk on the wild side,” Rayann protested. She tried to engage another kiss, but Teresa held her off. Then her eyes snapped open.

“Oh God,” Rayann gasped, then she stumbled to the other side of the alley and was spectacularly sick.

Teresa felt the cold night air on her breasts. Her entire body was like a vibrating bowstring. She pulled her bra down, buttoned up and then went to help Rayann.

Teresa let her mouth have its way. “Fuck you. I just want to help.” She stormed back into the club and stood there feeling guilty and enraged and really, really frustrated. Finally, she picked up a stack of napkins and went back outside. “Here,” she snapped.

“Thanks,” Rayann mumbled. She wiped her mouth and hands, then leaned weakly against the wall. After a minute she pushed herself upright, wrapped her coat tightly around her waist and walked down the alley toward the street.

Teresa stood there with her mouth open. What the hell had just happened? You know what just happened, she told herself. That bitch got one look at you and she puked, that’s what happened. You were never real to her. That’s been the whole problem all along.

She walked in the opposite direction to the Muni station, feeling as if she really wanted another drink. But she’d obviously had enough and there was no way this evening was going to end on an up note. She did remember to stop at the bookstore for something to read on the flight to Vegas.

It wasn’t until she was packing the following morning that she realized she’d bought one of those true love romances where girl meets girl, girl has fabulous sex with girl, and girls settle down in the suburbs to live happily ever after.

Well, it would be good for a laugh.