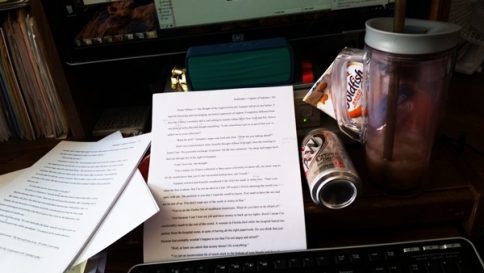 This debate always interests me, as I know people on both sides of the divide. Personally, I don’t see it as chicken or egg, but rather primordial ooze, spontaneous mutual creation. For me, some projects are wholly organic while others start firmly with an idea of general themes.

My work tends to be driven by character, and I shape character to fit themes and themes to fit character. For example, I can have a general impulse to write about grief and loss. To do that I’ll need to decide what it is my characters have lost or will lose during the course of their story. As I explore that, I’ll realize certain elements of the character that are essential; they can’t lose what they aren’t capable of having.

In the course of prompting the character into the plot, I/they discover other tangential issues that enrich the original theme. One character’s response to grief could surface her lifelong habit of settling, causing her to re-evaluate her career, lover, etc. If the Muse is taking her meds, my other characters have simultaneously discovered their own issues around settling and life expectations, and that theme could become paramount, leaving grief and loss as a plot catalyst and minor theme.

This isn’t the greatest analogy but I was making jello with my kids so it’s the one that comes to mind. Theme, character, plot for me are like making a ball of jello. At first, everything is liquid and impossible to hold. Once it starts to gel, a poke at one side makes the whole ball wiggle in response. As time goes by all the elements take on their final form until I can hold it in my hand. Even then, I don’t squeeze it too hard or I’ll be trying to do revisions up to the moment it’s typeset.

Generally, too, I’m not big on absolute rules when it comes to creativity. If it works for you, then it works for you; don’t let anyone tell you that the way you create is wrong.