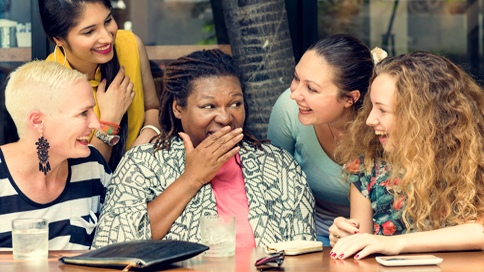 Question 1: A year ago I read Finders Keepers and was so inspired by Marissa’s story that I embarked on my own get healthy program. I wrote you a while ago that I’d lost 20 pounds and was feeling great. But the last month I’ve started gaining weight back and I’m doing the exact same thing I was before. Help! You’re my guru. What am I doing wrong? What would Marissa do?

Question 2: I just saw the new Jennie Craig commercial with Queen Latifah. What do you think of this campaign? What about the I Can Make You Thin guy?

It’s been more than a year since I started hearing from readers about the theme of personal empowerment through control over fitness and nutrition that is central to Marissa’s story arc in Finders Keepers. When I wrote the book I didn’t intend to start some kind of mini-fitness revolution amongst lesbian fiction readers, but what a great side benefit! Who says romance novels don’t change lives?

You’re Not Doing Anything Wrong

After successfully losing weight through consistent activity and nutrition you’re suddenly plateaued or starting to gain. You’re not doing anything wrong. You’ve done everything right.

My latest analogy, and I bet someone else has thought of long before me, is the new car. When you buy a new car the dealer always says that the gas mileage will improve after about 5,000-7,000 miles of use. The gasket, metal thingies, widgets and stuff all become finely tuned to each other, reaching a peak efficiency. After that, the car goes farther for less gas.

We Have Smart Bodies

Our bodies are incredibly smart, and they are just like a new car. We take up a new activity and our body gets better and better at it. Eventually, we go farther but burn less. That’s the road to fitness. Our body machine has gotten very efficient.

I know where you’re coming from. This winter, after easing my caloric intake by about 10% and my fitness output by about 12%, the math says I should have continued to lose weight, but very slowly – a half pound a month. I expected to plateau. After two months I’d gained six pounds. Every year I age the monthly impact of hormones in/hormones out also gets more extreme. That all seemed so unfair. I’d been hoping to reach a maintenance program that worked and instead my body went right back to what it does really well: prepare me for winter when evolution favored those with body fat to survive.

It sounds like your experience might be like mine—and it is unfair. Being born with a disposition to be overweight sucks. So does being born with muscular dystrophy or missing an arm or your eyesight, so let’s keep what’s “fair” in perspective. I say that as much for myself as anyone else as I can have a grand old cheese platter with my whine.

Success Comes in Many Ways

One important step is to have measures of success that aren’t about the bathroom scale. Yes, slowly regaining weight is a worry. And yes, it feels like failure. But if you can do activity to the point where your body is no longer burning excessive energy to complete it, you’ve done something fantastic for yourself and your future health. My favorite activity is still rollerblading, and I’ve been using the same trail for years now. Each lap is two miles; mile one is mildly uphill and usually has a head wind. Mile two is the opposite. When I first started skating it, my heart rate up was routinely in the 140s, and in the 120s on the return. Now it’s 118 and 109 respectively.

It’s a great low aerobic exercise that’s supposed to burn fat and support cardio fitness, though it’s too low to be building more cardio capacity. Well, the burning fat thing isn’t happening. The six pounds I picked up are still hanging around. But I have a healthy heart, and that should keep my spirits up while I figure out how to kick start my body again.

That’s what Marissa would do—if it doesn’t work any longer, change it. Put a new engine in the car and make it learn how to be efficient all over again. Find a new exercise. Add weights to walking. Find hills, try something you haven’t tried before. Give up two hours of the old activity in favor of something else—dance classes, water aerobics, maybe it’s time to look into a gym. Change the rules. Make your body learn something new. Mix up your food plan. You’ve probably got all the muscle you need, so consider less protein and more carbs. Don’t go to extremes, but change the expectations of your body so it has to reboot.

Remember, though, that your goal was to get healthy. Healthy doesn’t mean you have to be thin.

I love the Queen Latifah commercials for Jennie Craig. Yes, the first commercial they really bulked her up with big sweats and in the second she’s wearing that honey of a wrap dress and my, but she’s a fine figure of a woman. But what I love about her script is the emphasis on activity. Exercise is not just an asterisk, but part of what she represents as essential to her success. The goal isn’t to lose weight or be thin, but to be a “size healthier.” I like that message much better than previous ones.

He Can’t “Make You Thin”

Which brings me to “I Can Make You Thin.” I watched the first program out of curiosity, and there’s little presented that isn’t already well documented. The information isn’t new and it isn’t rocket science, but it is being presented in a new way. I take issue with the statement that “I” can make you thin, as if these insights were developed and researched exclusively by Paul McKenna; they weren’t. The techniques are common sense, but the missing component for me, in that first program, was showing a working mother with a family to feed on a busy schedule and showing how she is supposed to be part of her family’s dining process while still eating only when she was hungry, and eating slowly.

Any Plan Has to Work for Your Life

It was my experience that I had to structure my family’s meals around my eating plan, whether they liked it or not. We dine out three nights a week so everyone gets some choices, but the other nights are lean and basic and carefully calculated down to the last calorie and portion. I always have to find something to add to the kids’ plates to give them the fats and calories they need to keep growing, something that I won’t be tempted to eat myself.

This is a juggling act that requires focus and attention, and—darn it—often that focus and attention eats into my energy for exercise. And my work. And my good humor. So I found the program left out some of these coping issues that may be unique to women, issues I tried to have Marissa—or her partners in her efforts—at least bring up as realistic barriers. However, if these techniques, explained that way, help develop new habits that are helpful, the more power to it.

If a diet doesn’t incorporate exercise, it’ll fail. If a program wants to sell you gadgets, pills and other merchandise on top of their advice and basic services, be suspicious of the manufacturer’s real intentions—your health or their profits?

In spite of the growing amount of good information, there are still the late night infomercials for fake supplements. The one where a heroin-chic-thin actress poses as a user of the product and gushes, “I’m going to have pizza!” still upsets me. It’s a lie, the product is a lie, the entire “supplement” is a scam. And yet there it is, being sold with carefully phrased messages that keep them from being sued or brought under the control of the FDA. Resist! It isn’t futile!