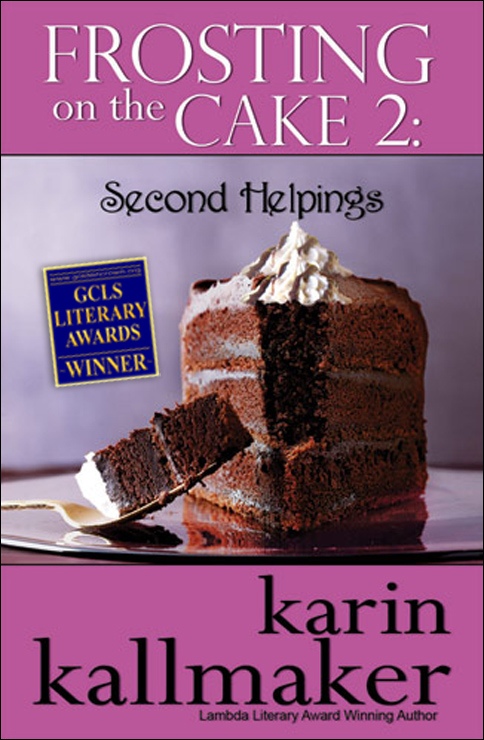 After a rocky couple of weeks spending too much time on the unpleasant side of the book business, I’ve been back to writing and the final edits on a bunch of short stories. Finally, the project is coming together. It feels like a book. And that book is Frosting on the Cake 2: Second Helpings.

Long-time fans know that Frosting on the Cake (hereinafter called Frosting on the Cake: The Original) is a collection of short stories inspired by my previously published novels. It was published in 2001, and featured 13 stories that take place after my first ten novels. Above Temptation (July 2010) was my 22nd book (not counting those written as Laura Adams or in collaboration with other writers). It seemed like a good time to revisit as well as collect stories I’d published in some other volumes that would also fit with this one.

So far, it looks like a total of 18 stories. Of that, 7 were published previously in other anthologies. Because some were in anthologies with a common setting, when lifted out of that context they needed specifics added to them, so they’ve all been enhanced with more detail and if further inspiration struck that went in as well. There is an 8th previously available story that BellaBooks.com gave free to customers as an eStory last year, in celebration of my 20th anniversary of writing. If you missed it, now you’ll have it.

Ten more stories are original to this collection. I thought all the stories would be only from books I’d published since the original Frosting, but some old characters still had something to say. Like last time, the one that slipped into place the easiest was Faith Fitzgerald of Wild Things, who is journaling Sydney’s latest political campaign. A short (and extremely unedited) snippet of that is below.

When the manuscript is all signed, sealed and delivered I’ll post the individual story titles and their source of inspiration. The collection will be out this fall and Frosting: The Original will also be rereleased at the same time, and available in ebook for the first time as well.

And now, after the jump, the equivalent of a dab of frosting on your finger. You know you want it. Forgive typos and malaprops; it’s not been edited.

Chapter One
As a historian, I had promised myself I would not censor my journal. Someday it could be part of presidential archives. Someday, some historian much younger than me would read it. It should not be prettied up, it should not reflect only my best thoughts. If I allowed that to happen I owed a number of students better grades than I had given them.

I was about to resume typing when the scent of Sydney’s cologne tickled at my nose. It was custom-made for her and always made me think of sunshine on warm linen. Leaning back in my chair, I put my hand on my shoulder, wiggling my fingers. She took them in her hand and turned me to face her.

“You looked so solemn.” Her brown eyes, velvet eyes, wrapped me in affection

“Recording for posterity the inappropriateness of being asked about your wardrobe plans.”

“I’ve told her time and again to always ask me. I’m sorry they see you as the typical wife.”

“I mostly am the typical wife,” I said. “It’s their view of what a typical wife does that I find regressive.”

She kissed my forehead—the one public display of affection candidates in her position were really allowed. Politics today, however, meant it was entirely possible a rabid pundit would insist that the unborn child of the pregnant aide could be forever damaged by our wanton displays. The wedding rings on our fingers were no shield against people who made millions as professional liars.

I wanted to relax into her. Put my head on her shoulder, tell her a funny story or ask her to go to the movies with me. We’d discuss the choices, air our feelings about the performers, and if we should disagree we’d share a kiss or two to make it all better.

Our disagreements could be spirited. The making up…more so. I missed that. I missed her.

Perhaps she knew, because she let me lean into her for a long moment, giving me strength. I took it, greedy creature that I am. When she was standing in the convention wings tomorrow evening, waiting for her momentous speech as a woman on the edge of history, I would give it back.