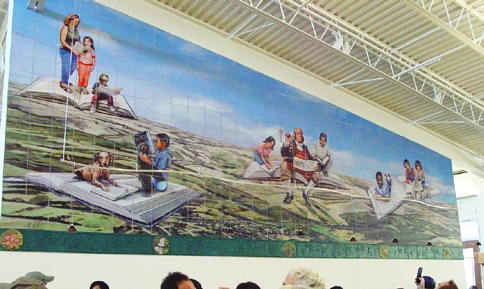 First, people with money were bamboozled into giving away their hard-earned dollars so everyone could get things for free. Then, the state government took money from taxpayers and gave more dollars so people could get more for free, and after that the federal powers-that-be used the pork barrel system of earmarks to direct a pile of cash directly to a specific group of local recipients, all to give away something for free.

A local government land grab mandated the use of adjoining property for only one purpose–and there’s no end in sight. The monopoly controlling power dictated the consumption of every watt and therm. Activists funded no doubt by the footwear industry are agitating to dig up more of a culvert full of thriving indigenous plants so that it won’t be more convenient to drive– that’s unAmerican! Many of the users of this boondoogle, by its very design, would not even be taxpayers! 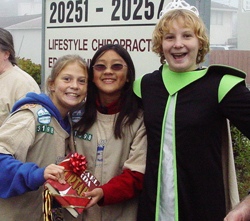 The final stage–last straw, if you will–of this project happened this morning. As the picture plainly shows, it involved the slave use and indoctrination of innocent children standing in the cold and in some cases forced to wear some kind of bizarre alien princess uniform.

They even exploited a child’s naivete for their own fund raising purposes by using this quote from a sweet little fifth grader:

We need more books so we can imagine new dreams.

It’s called a public library, first perpetuated on this continent by that socialist womanizer and anti-credit economist penny-saved-penny-earned pundit Benjamin Franklin, whose image is now stamped on taxpayer-funded walls. How far have we fallen, America, that such a project is perpetrated on our citizenry merely because it promotes the ideals of the elite? Literacy – we can get our cell phones to read our books to us, nation. What do we need letters for? They just slow us down and get in the way when we want to remember our PIN.

So, obviously, I’m having my fun channeling some Stephen Colbert. Probably because many times during our busy morning I thought, “This is why we have government. This is what I want my taxes to pay for. This is why I care enough to vote.” So call it what you want, but to me, our new public library is a fine example of communityism. 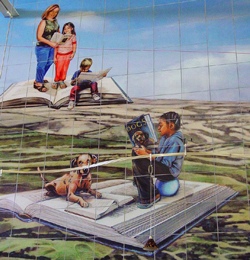 The community needed, they raised money, they pleaded, they strong-armed, volunteered, persisted, begged and no doubt wrangled amongst themselves. Twenty years after the first person said “This library is getting cramped” the dreams became a a green-friendly, clean, well-lighted, FREE place for books. Ingrained into the concept was the library’s community role as a gathering place for people and public art. It went live today on time and on budget. And yes, a large percentage of its users don’t pay taxes–they’re called children.

This morning my partner, daughter and I, along with more than a thousand other local residents, participated in the ceremonial passing of 300-plus books from the old, perhaps 8,000 square-foot library, to the new state-of-the-art 32,000 square-foot building. The 7/10ths of a mile bucket-brigade style pass took about thirty-five minutes.

As speakers noted, the building is ours. It’s “silver” rated for energy use, and part of the grounds liberated an underground creek that had been driven through a culvert. Indigenous aggressive plants (known as weeds) have been replaced with an anti-erosion rain garden, and the fencing is rustic, functional, and another piece of commissioned public art. Fund raising is now focused on finishing the creek project to allow foot-access to the library from both of the busy boulevards nearby. While it sits within sight distance of a BART train station, driving to the library hasn’t been discouraged, not when parking spaces went from about 25 to more than 140.

After a series of endearingly brief speeches, the ribbon was cut and the doors opened. I’ve visited a lot of libraries, but was absolutely delighted with the space, the air, the Teen room, the substantial children’s area. After all, call me a nasty old pragmatic capitalist if you like, but children who read are my future customers.

By far, this morning was the most memorable Halloween morning this good little witch has had in ages. I watched person after person turn the book they were handed around to read the title, seeing in so many faces the thoughts, “Have I read this one? Oh, this looks interesting!” We were all book junkies, and we were getting a major contact high, perfectly legal. Later, we came down at Rudy’s Donut House, where two hot chocolates and three donuts (jelly-filled for me, OMG) cost the same as a Starbucks Venti what-a-ccino.

As a good library should, a few of the books I handled were sure to offend me, but I passed them right on; they belong in the library too. Our tiny library collection was actually dwarfed in the new space. Hmmm, maybe they’ll have room for more lesbian fiction titles, then! 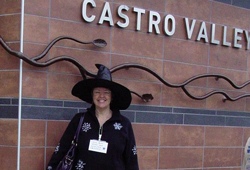 About the photos: The new children’s area features a large multi-paneled mural. It doesn’t show, but there’s a string on Ben Franklin’s electricity kite that is all colors of the rainbow, a nod to the diversity of our community. The alien princess might be my daughter; the socks indicate that it probably is. The portion of the mural with the boy reading about Dogs (and the dog presumably reading about Boys) made me think of Groucho’s quip, “Outside of a dog, a book is man’s best friend. Inside of dog, it’s too dark to read.” As for the good little witch, I was forced to rise at 7 a.m. on a Saturday. I was lucky to find the hat. There are years when I’ve just worn the name badge, which reads, “Local #1313, Witches Union, RECRUITER, Come Fly With Me!”

Visit me at Facebook if you want to see more photos of the Castro Valley Public Library, 3600 Norbridge Avenue, part of the Alameda County Library System. Just click my photos tab and open the album for Rampant Communityism.