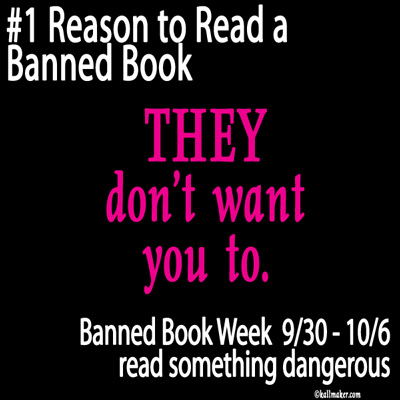 Our Bodies, Ourselves. Moby Dick. Catcher in the Rye. Native Son. I Know Why the Caged Bird Sings. All banned. Imagine your life without To Kill a Mockingbird.

Think that banning books is something that used to happen?

The Hunger Games. ttyl. Nickle and Dimed. The Perks of Being a Wallflower. The Golden Compass. Beloved. Bridge to Terabithia. The Chocolate War. And To Kill a Mockingbird, Catcher in the Rye and I Know Why the Caged Bird Sings are still challenged. Even Where the Wild Things Are has been challenged for its “dark” undertones. Check out the American Library Association‘s list of frequently challenged books.

A Facebook follower asked exactly who it is that bans books. My answer is that it seems the very same people who decry the nanny state want to be the nanny state. “Concerned” citizens want to protect “innocent” minds from corruption–but only as they define it. Their challenges are primarily based on religious grounds (the book isn’t supportive of their religion) or sexual content (including the mere mention of the existence of LGBT people).

Spurred by either a conservative commentator who has decided to make an example of a book or their church or their own initiative, they complain to school boards, library boards, city councils and anyone they think they can sway and ask for the book to be removed from classes, libraries, even bookstores.

The ones who stand between these “concerned” citizens and our right to read whatever we want are librarians and booksellers. So I want to take this opportunity to thank them for their unflinching support of the right to read. By protecting that right and fighting censorship, libraries and bookstores support the right to exchange ideas and to think.

So read a dangerous book this week. Even if it’s merely Where the Wild Things Are to your kids.