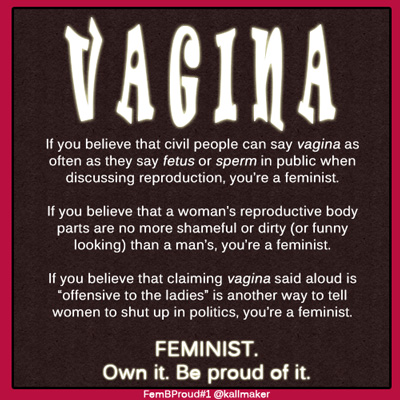 Actually, I don’t mean “vagina.” Though certainly if an elected official can be banned for saying it during public debate, it’s quite obvious that some people think “vagina” is a dirty word.

I’m talking about an even dirtier word: FEMINIST. I think younger women have heard “feminazi” more than they’ve heard “feminist.” So this meme and more like it is my way of saying that “feminist” is a fabulous word. It’s a word to stand by, and those who have claimed that label have cemented rights and continue to try to level the playing field so that girls can have many of the same choices and opportunities as boys do.

To paraphrase Bella Abzug’s famous definition of feminism, it’s not about a woman becoming president. It’s about your average Jane getting the same chance in life as your average Joe. No more, no less.