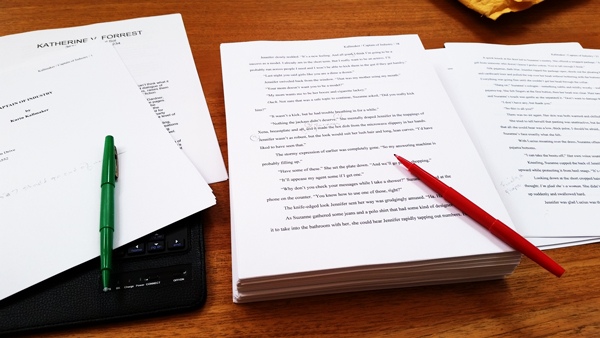 Okay, be honest. Did you read the title and think I left out two hyphens? I understand why the hyphen in emailhad to go. It was a fairly new word and still hadn’t been standardized. But for as long as I’ve been reading books, the time of day was expressed six-thirty. Or nine-fifteen. Or twelve-thirty-two. What possible misunderstanding on the part of reader caused the powers that be at the Chicago Manual to decide that twelve thirty two was better? I can’t help myself…I had to go back and take out the hyphens after I typed the previous sentence.

Given how I feel about it I can feel reader red pens all over the world circling the “error.” Will I ever see it as not wrong?

There’s the issue with commas too. I’m usually not all that certain where they should go anyway, but I dutifully learned to add the comma before words like however and too, but that’s no longer right. Too busy…too many commas getting in the way. Now this is the correct punctuation also.  I still am not quite used to it, but I’m getting there.

There’s rumors that the rules on commas can now be boiled down to “If it aids comprehension then the comma probably goes there.” This seems to me close to my personal rule, “If I read it aloud and pause, that’s where the comma goes.” This after years of being told that was not how to do things. If only I had the chutzpah of Gertrude Stein who thought commas were insulting to the readers’ intelligence so she never used them in any context. She knew that she knew that she knew what I don’t know.