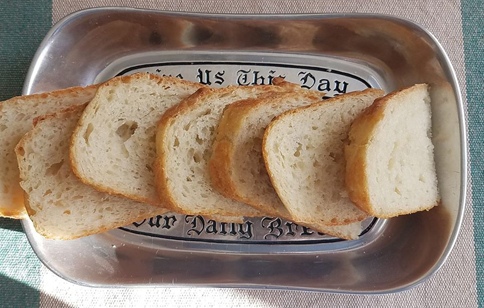 Recipe blogs only happen when I love a recipe and make it lots and think it’s worth the effort and expense. (Like this one for Green Beans, Potatoes, and Ham in the Instant Pot.) When the pandemic hit a lot of people found themselves with time to bake bread. But if you’ve never made bread the very idea is intimidating.

And I say that as someone who was taught how to bake bread by a master of the art – my grandmother, Marie. She made her family’s bread for decades. She taught me her method, which starts with the water leftover from boiling potatoes. I’ve attempted to make it several times from my girlhood notes, and it’s just not…the same. Fifty years later I’m still spoiled. Plus it takes more time and attention than I want to give.

It also uses a variety of skills to pull the whole thing off. So when I saw “no-knead” bread shared I thought, well, hmmm, that would be easier. I checked out the recipe. No way, I thought. It can’t be that simple and still produce actual bread.

But it is and it does! This recipe, courtesy of the fine people at King Arthur Flour, is easy. Short ingredient list, and not very many tools. This is the recipe to get anyone started baking bread.

It’s quick, as time is measured in bread baking. Two and a half hours later, you’re taking hot bread out of the oven. And it stirs together easily by hand, so there’s no hauling out a mixer even.

It takes out one of the steps, kneading. That means no flour all over the counter.

Plus I’ve developed some tips and tricks to make it even better. I’m sharing them for your sake, sure, not because my memory sans estrogen sucks. (That’s also why I immortalized the recipe and steps for chocolate nut candy made in the crock pot.)

Go to the Source – the Experts

I’m not going to repeat their recipe. Because I think it’s important to follow their instructions, step by step, the first time. It’s described well, even if you’ve never baked bread before. Let the experts take you through it. Read it all the way through, assemble ingredients, and go for it!

So give it a try. The next time you want to make it – and you will – hop back here and have a read through my tweaks, variations, and general tips I’ve discovered along the way.

You can do this! I promise! Once you’ve taken your own fresh bread out of the oven there’s no looking back. (After that, try the best oatmeal cookies ever because you are a baking badass.) 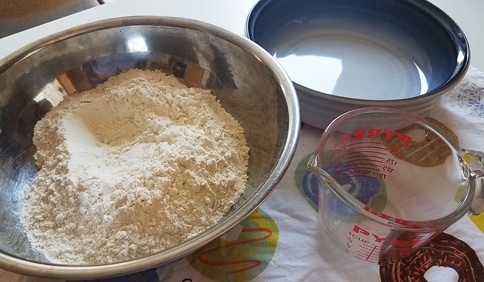 Here’s my favorite baking dish and bowl for this project, with the 4 cups flour to show how much room you’ll need for the first rise. 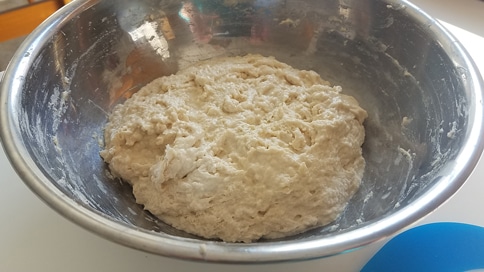 The first mix of ingredients is all done. Get ready for the miracle of yeast + salt + sugar + warmth + time! 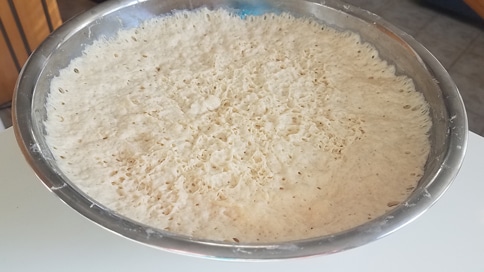 Here’s the first rise completed. It’s already deflating a little bit because I moved it from its warm spot. 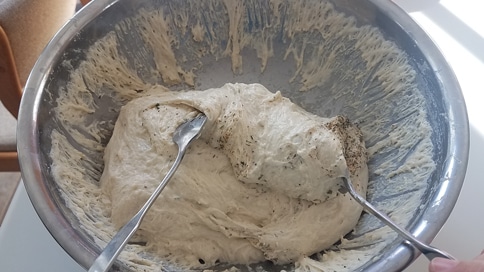 After bread rises the first time, it’s “punched down” to let out the yeast bubbles so it can transfer to its baking dish for the second rise.

Second Rise in the Baking Dish 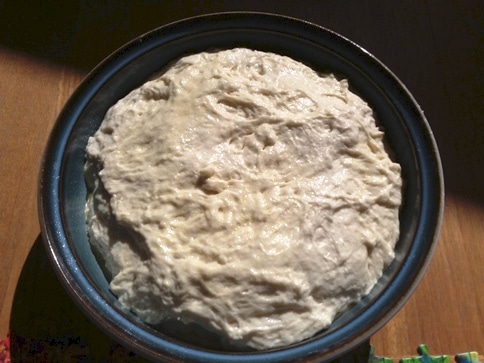 Ready for the second rise! 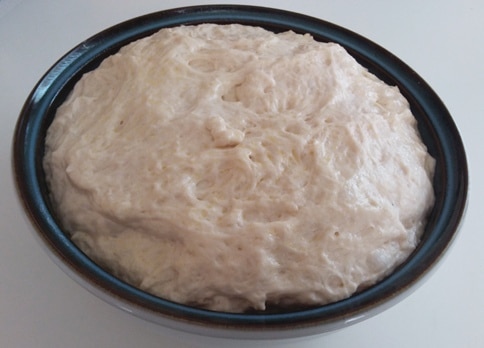 Second rise is done, it’s time for the oven. 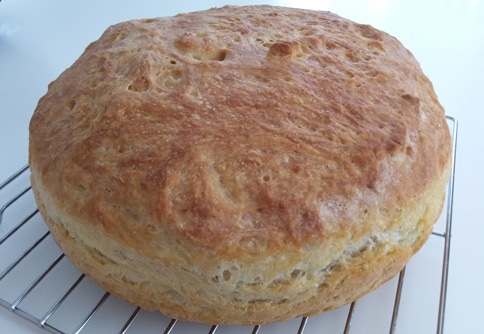 This loaf needed maybe 3-5 more minutes in the oven. You want it even darker golden brown. Still delicious, especially toasted. 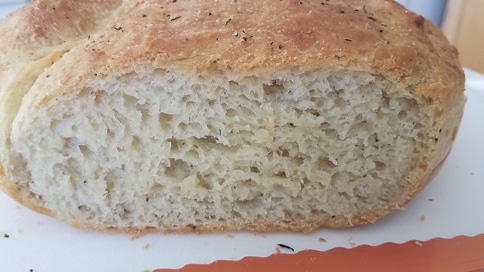 Herbs turn it into a great savory bread. So pretty. So yummy.

The texture of the bread is coarse with large bubbles, making it really excellent toasted the next day. It handles jam, butter, olive tapenade, smashed avocado, you name it. It’s also great as a mopping up bread with soups and gravies.

If I want to be sure to have the flexibility to enjoy it with both sweet and savories, I make the recipe as stated. Sometimes, though, I really want a savory version with herbs. I have a delicious salt-free herb blend (marjoram, thyme, celery seed, chives, parsley, paprika etc.) with a touch of black pepper that is perfection. Herbs de Provence or an Italian blend – or a “Mrs. Dash” type salt free blend – would be delicious too. Stick with salt-free if possible to avoid giving the yeast more salt during the first rise.

The herbed version cries out for tapenade or dunking in tomato soup. Or to be smeared with garlic butter and sprinkled with Parm.

I’ve also dusted the herbed loaf and the pan with grated Parmesan cheese and just see what happens. Result: delicious, but the parm got very dark because of the initial high heat. It was definitely tasty, but I’d probably not do it again.

Several times I’ve also baked it in a nonstick 13×9 rectangular pan for the initial 15 minutes at 425 and then 20 minutes at 375. Small cubes of mozzarella or half slices of pepperoni poked down into the came out delicious. It was sliced and eaten sooner, and would be a great accompaniment to any pasta or soup dinner. Toasted next day, slice of cheese added…yum.

If My Son Can Do It You Can Too

Proud mama moment. My 26-year-old son watched me months earlier make a batch, then tackled it himself based on the original recipe and my blog. Perfection! He didn’t spray the top the way I do and the top was therefore softer and easier to cut. Another way to enjoy it, entirely a personal preference. 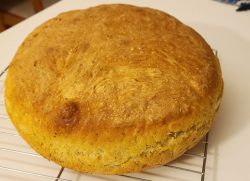 Nice hollow sound when thumped and a swirl that reminds me of a Van Gogh sun.

Perfect crumb, perfect distribution of herbs, and delicious, every bite.

See the King Arthur nutrition info for all the deets. If you are superhuman and you can slice it into 20 servings, it’s 90 calories a slice. That’s a big IF, though. We fall on it like ravening wolves. When my son was visiting, and we made it together, it didn’t last long enough to count anything.

Other Recipes I Love

This is not a recipe blog, and I’m not trying to monetize your eyeballs. I only do a recipe when I really, and I mean REALLY, love the result. Check out my Cheery Cherry Oatmeal and Dark Chocolate Cookies. They’re worth it.