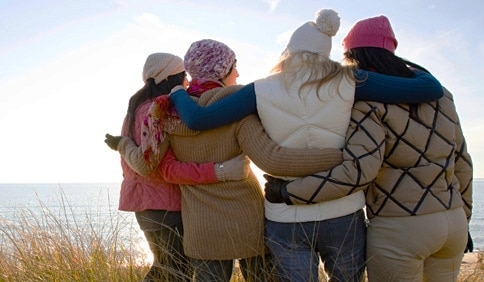 Romance authors are genuinely frustrated and harmed by the cheating going on at that big platform. I’ve been seeing a range of exasperated comments around the writing community about something else – authors being jerks to other people in the business while marketing their books. It made me wonder if the frustration and lost income over cheating has made some authors resort to undesirable behavior to try to compete. If so, it’s a losing strategy.

Cheating *IS* at Flood Stage

There’s plagiarism by putting other writer’s books in a blender to produce content as quickly and cheaply as possible. Kindle Unlimited has been rampant with book stuffing. The style of payouts has content producers gaming the system by paying for review and page turning farms and all the rest. This is happening on the Amazon platform for various reasons detailed at the blogs and articles I’ve linked to.

Cheaters and bad actors are prospering while the platform they’re cheating on is slow to act. Or, the changes Amazon does make are automated, and punish innocent authors as well as bad actors.

Wide distribution insulates me somewhat from losing royalties directly to these cheaters. I am painfully aware, however, that their “lesbian” material is skewing the content offered to lesfic readers. Their multiple weaponized tactics nominally disguised as queer or ally voices displace stories with authentic visions of women-loving-women.

Cheating tactics explain how for several weeks last year the #1 “lesbian” romance title was a 4-year old novel about a married straight couple having threeways with their Lolita-esque nanny. None of this fits my definition of an authentic woman-loving-woman story.

I was so taken aback by the content of some “lesbian fiction” chart toppers that I wondered, “Is that what my readers really want?” The answer is no. Those books were propped up by this kind of trickery. Those authors hijacked rankings so that algorithms sold their books over authentic #wlw stories.

I do love Fakespot.com but how many readers take the time? The book I used was sold as lesbian fiction. It featured repeated coerced consent. Which is totally cool because she secretly wanted it and it was True Love./sarcasm

The cheaters are doing the same thing to sub-genres representing cultural diversity. As Sarah Jeong laboriously reported for The Verge, “Similarly, because fewer books overall fall into the “Multicultural & Interracial” romance category, books that don’t actually feature “multicultural” or “interracial” pairings can be found even on the first page of search.” Those researching these teams of marketers and content producers find mostly white male faces generating this kind of content.

The Rise of Not-So-Nice

The cheaters are changing the nature of the romance genre by automating, cloning, and mass publishing repetitive products that create trending themes. Their highly visible success encourages other authors to imitate their content. On that point Jeong also writes, “Authors like Suzan Tisdale, Zoe York, and Margaret Bates expressed the fear that book stuffing as a phenomenon was changing the culture of the genre. Romance, they assert, has gone from the kind and friendly, woman-centric atmosphere described by This American Life in 2003, to something scarier and more misogynistic.”

I have no solution for the cheating. When it’s not profitable, people won’t do it. But I do know that acting like an asshat to other people won’t fix it.

Readers do not owe you anything more than acquiring your book legally. Reviewers are not obligated to review a book you’ve sent them. Your ego is your responsibility, period.

Spaces that are not yours do not become yours because you have a book to sell in a tough environment. The rules of social interaction don’t change because software will allow you to behave as you probably wouldn’t dare in real life. Posting buy links on other authors’ social media will not sell your book to them or their followers.

Private messaging your buy links will get you remembered for all the wrong reasons. Hijacking and piggybacking hashtags with your off-topic marketing will get you the wrong kind of attention. And then there’s capping that off by refusing when people ask you to stop.

Online and in real life, when someone says “stay out of my personal space” and you don’t, you’re the asshat. Maybe there could be a good reason for being that asshat, but selling your book isn’t one of them. 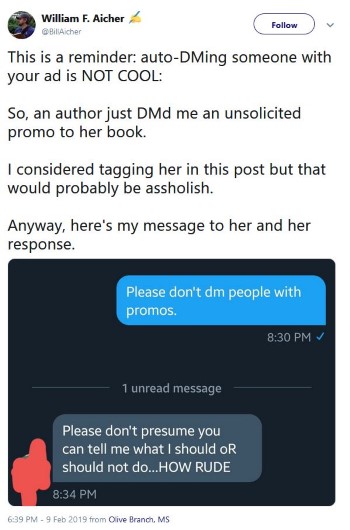 Author and social media guru William Aicher will not forget this author. If she responded this cluelessly to him she likely did the same to other people. Nobody publicly shamed her for her behavior, but this author wasn’t so lucky.

However! The fact that Goodreads hasn’t banned the author permanently, in spite of six months of being reported for TOS violations, doesn’t mean it’s okay.

Some Things Have Not Changed in 30 Years

Commas and hyphens don’t go where they used to. Paragraphs and chapters in fiction are shorter. The pipeline to publish is measured in months, not years.

But these essential truths haven’t changed:

These are challenging times for authors. Our incomes are whittled down by corporate devaluing of books and reading. (Adjusted for present value, a book today costs less than it did in 1989 when my first book was released.) Meanwhile cheaters vacuum up reader dollars.

This business has never been an easy one. I’ve lived through boom and bust, and sweeping changes in every aspect of publishing. For me there has been only one constant: people.

The people I meet, the readers who tell me that my words made all the difference, the reviewers who gift me feedback, the friends I make, the relationships I build. I can’t pay my bills with any of that, but I know that for me, without the people I’d be bankrupt.