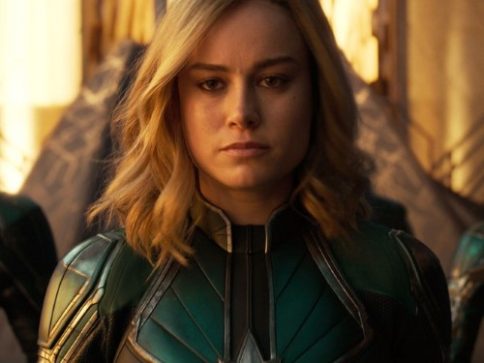 Captain Marvel is as good as many and better than some of the other entries into the Marvel Cinematic Universe (MCU). It lights up all the levels in my feminist heart, and it also pleases as an entry into this massive franchise with 17 films and counting. I’ve watched every movie multiple times, and I’ll rewatch this one too.

It’s not the best movie in the MCU. It’s also not a Susan B. Anthony dollar.

It’s not a token nod toward representation of women that’s executed to guarantee unpopularity, mediocrity, and, ultimately, failure, so that men who control the spigot of money and opportunities can say, “See? Projects that front women don’t succeed.”

Instead, Captain Marvel presents on screen with all the resources of the MCU. Resources like budget, star power casting, and quality writing that both blends into the existing MCU and creates fresh space of its own. It is interwoven into the canon. It’s also given the same rein to make it’s own contribution and remixing of that canon.

Which means it is not a one-off that can be omitted or ignored as a “diversity” story. (It’s also the movie that got Rotten Tomatoes to mitigate the impact of reviews of a movie before its release date. Sorry, trolls, you brought that on yourself.)

As “just another” Marvel movie, it’s been given all the opportunities to succeed, including merchandising, and tie-ins. In that way the MCU is its own testing ground, and it has proven that all other things being equal, stories fronting women (and people of color i.e. Black Panther) perform as successfully as any other. They’re so confident there’s rumors of a queer lead in a future movie.

Other successful movie franchises take note: There’s really no excuse for not fronting women and people of color in your universes. Representation matters, FYI.

Look what you get when women get the same resources and opportunities as men – who knew? Somebody should perhaps tell the U.S. Soccer Federation.

We Don’t Have to Choose 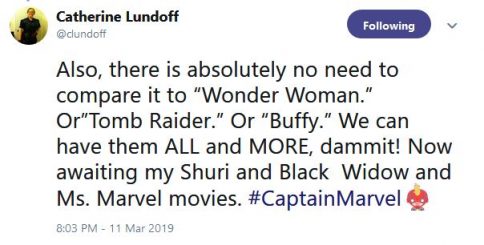 As Catherine Lundoff so succinctly said, there’s no need to compare woman-fronted movies to each other. We deserve them all.

How about we make so many movies with women lead characters that if one flops nobody worries that it’ll be the last time one gets financing?

And More of This, Please

I squealed with glee when Carol blew a hole in the promotional cutout from True Lies, leaving only Jamie Lee Curtis still standing. And I noticed that for a whole lot of this movie, she doesn’t smile unless she’s making a joke – and neither did Maria Rambeau. There’s even a nod to the “smile, lighten up” thing women get told. (On second viewing, she does smile a lot – but only when there is humor in the scene, and there is plenty of that. It’s the unnatural only-women-do-it smiling and nodding ingratiatingly while the men talk that’s refreshingly absent.) 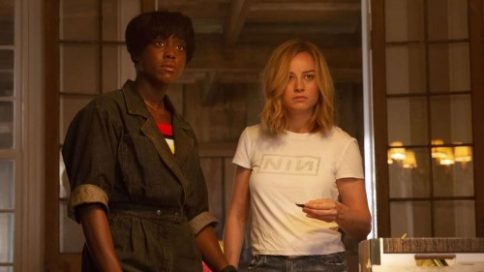 She never flips her hair, sends out coy signals, or strikes a submissive pose (e.g. tips head to show throat). Her conversations with other women are not about men. Bechdel test – passed!

And please, oh please, more female bonding that changes the world. I know, I dream.

How Many Men Does It Take..?

Totally not lost on me that Nick Fury had to replace one woman with a whole lot of men plus a god to get the same job done.*

* Yes, I know, Black Widow – I’ll amend this statement when her name is in the title of an MCU feature film.