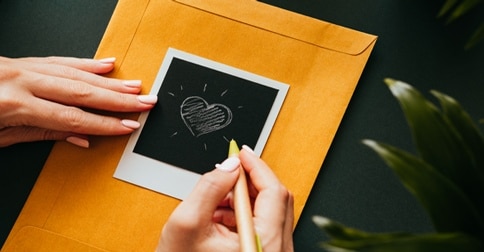 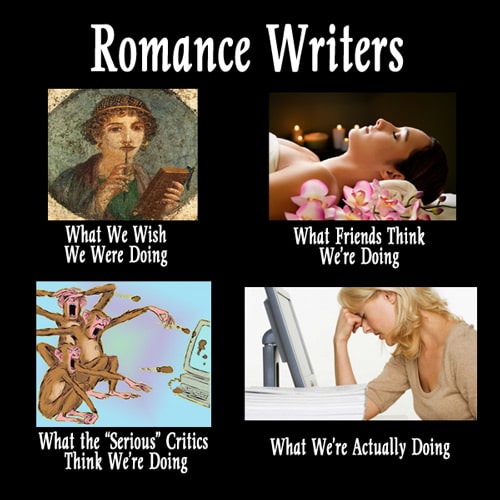 What Romance Writers Actually Do – meme by Karin Kallmaker

IfJowita Bydlowska meant to show herself as being unable to research a market, study its readership, plan a campaign and then follow through on something, then she succeeded wildly. But if she meant to be funny and self-deprecating, then she failed completely.

A Plateful of Disrespect, Just In Time for Valentine’s Day

It’s been a while since a personage of loftier pursuits succeeded so thoroughly at disrespecting the romance genre – writers and readers both – and were given a national publication platform to do so. By the way, shame on you National Post Book Section for the decision to celebrate romance by crapping all over the books that do so.

In the essay, Confessions of a Failed Romance Novelist, Bydlowska (Drunk Mom) explains that she wrote a romance novel because she envied a friend’s seemingly easy financial success after doing so. Having been advised by her agent, she says, that romance novels are simple plots with not terribly complex characters, she nevertheless bravely persevered with her unique, cut-above romance novel:

“I decided the world was ready for a book about love with many subplots, dealing in experiences more complicated than a sudden, early outburst of butterflies.”

She put her book out into the world, hiding behind a fake persona, and falsely engaged with other writers and the readers. She expected to succeed, like her supposed friend (whose story reads like Amazon’s puff success pieces meant to elicit content into their lowest paying tier). But she didn’t. She did exactly what critics think romance writers do. See meme monkeys above. This meme is the single most popular post on my blog for a reason.

Up with this shit we will not put.

She half-heartedly tries to blame herself. For one short sentence she says, “I have to believe in it, non-cynically, otherwise who is possibly going to believe me?” That much she gets. But the rest of her essay squarely puts the blame for her lack of success on the genre itself.

So that’s why she failed.

Spare me the faux ha-ha and backhanded attempt at “maybe it’s just not for me.” Writing any book takes work. Writing a good book is harder work. Writing a book in a genre with established rules and highly specific expectations from readers, and meeting their expectations, book after book after book, knowing that your last book is compared to every book you’ve written before and to those of your peers in a market flooded with choices is Fucking. Hard. Work.

Punching Down at Other Women is Not Funny

The arrogance of thinking you can wander in and help yourself to some success in any creative field is breathtaking. And tell me, would you have ever thought you could do that in the mystery genre, in the horror genre, in any genre other than one that was primarily written by and for women? Men routinely punch down on romance and the women who write and read it. They think it makes them tough and the world take them seriously. All I see is bullies hitting on what they think won’t hit back.

Masterful Heidi Cullinan take down of The Mary Sue for the exact same thing: The Mary Sue Smears Romance – Twitter and I Respond