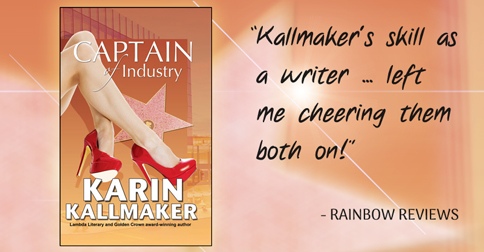 So much mail, so many posts, tons of comments. I’m thrilled at the reception that Captain of Industry is getting! There have been some questions that I didn’t foresee, so I’m going to answer them in a quick post.

Q: You included a number of characters from your other books in the opening chapters. Is this a farewell to all of them? Are you putting down your pen?

I’ll stop writing when they pry the keyboard out of my three-day dead hands. So there’s that.

Captain was inspired by another book so at a minimum there was going to be character crossover from there. I had planned all along for one particular character from another book to show up to give a big political speech. Then I realized that with thirty books to draw on, I could populate the entire party just from the characters who live in California alone. So of course the wine was from my favorite Napa Valley vineyard and so forth. I tried to fit them all in, but the scene changed from moving the plot along to a lot of name dropping and back story sketches. So there are just a few.

And yes, if you think there’s a wee Easter egg to another author’s books, you’re right.

Q: I loathed Jennifer Lamont in Stepping Stone. She was a horrible person. Why would you want to make me understand her? I even empathized with her. Why did you pick her of all people?

Everybody’s got their something. Why would a strong, talented, driven woman use such deplorable tactics? She’s a royal bitch. My brain went ping: Even bitches have backstories. Why would she think those tactics will get her what she wants? Because they’ve worked before, maybe? “I messed up” with a pretty mea culpa speech seems a constant for all sorts of stars. That her usual tactics don’t succeed in Stepping Stone (at least not entirely) is a setback for Jennifer, and a chance for self-examination. So Captain of Industry explores what made Jennifer and then what changed her.

Plus I explored the other theme that interested me: when two people or the world aren’t ready for love, not even a successful Internet millionaire who seemingly has the world at her feet. Money can’t buy peoples’ hearts.

Q: I can’t find Jennifer in the scene you described that seemed to be from Space Jam.

She’s not there. Fiction. Stop looking.

Q: Is Napa Valley really that beautiful? I feel like I should visit it as you’ve written more than once about it.

Yes. The photo above is a still from the movie Bottle Shock. I put the trailer for the movie below. Because Alan Rickman. And it’s a fun movie. But mostly Alan Rickman.

I chose it as a place where Jennifer and Suzanne weekend together because it’s exactly where a money-no-object-but-can’t-be-far San Francisco dweller would go. And Bottle Shock is exactly the kind of movie Selena Ryan would make.

Q: Aren’t you the teensiest bit sorry you kept me up all night?

You’re going to need an electron microscope to locate how sorry I am.

Q: When is your next book coming out?

I have to write it first. I have a great idea, which is a relief. I’ll be attaching seat to chair after Golden Crown. And I get my website upgraded from unresponsive HTML. It’s not even HTML5. Very sad state of affairs. But it will be next year, she said confidently.

And now the trailer for Bottle Shock. Because it’s simply divine to hear Alan Rickman say, “You think I’m an asshole. But I’m not really. I’m just British and…you’re not.”