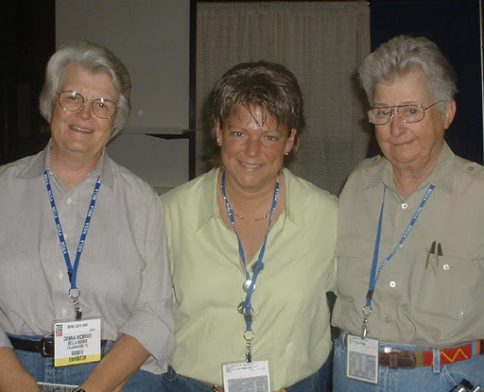 Barbara Grier had a quick wit. I don’t believe I ever saw her at a loss for words. I was seated next to her at a banquet when she realized that the 2002 Lambda Literary Pioneer Award was being awarded to her and Donna. She muttered something to the effect that it would have been nice to have known so she could prepare decent remarks. Even so, her acceptance speech was cogent, on point…and perhaps she was just the tiniest bit flabbergasted. But definitely not at a loss for words.

Do I need to explain that Barbara and Donna were two of the founders of Naiad Press, which went on to be the longest-lived and largest of all the lesbian presses? That Barbara Grier and Donna McBride had been partners in everything since the early 70s? I hope not.

But it’s also possible that lesbians reading this blog have never heard of either woman or Naiad. But your life was touched by them nevertheless. Barbara, with Donna at her side, was one of those women of the lesbian movement who challenged oppression and saved lives through sheer force of personality and long, grueling decades of hard work.

This morning, at the age of 79, Barbara passed away in Florida due to complications of heart disease. She is survived by Donna McBride. The photograph above was taken in 2005 during Book Expo of America. Donna is on the left and Barbara the right, with Linda Hill of Bella Books in between. I know that Linda wouldn’t want to intrude on this moment in time, but it’s the only good photograph I have of Barbara and Donna. I look at this picture and think they were the perfect lesbian stealth operatives – they look like someone’s grandmothers and more likely to bake you cookies than give you a copy of Pat Califia’s Sapphistry or Lesbian Nuns: Breaking Silence.

To understand the contribution that Barbara and Donna made to lesbian books one has to be capable of imagining a world that had none. Such lesbian books as there were had been hidden, disguised and coded. A lesbian lucky enough to find pulp paperbacks at the bus station featuring a brooding brunette and a sunny blonde on the cover found lesbians in books, but not lesbian books.

With very few but notable exceptions such as Ann Bannon’s Beebo Brinker titles, bus stop pulp novels were stories about despair and ruin. Those books were read and left behind, because it wasn’t safe for most women to be discovered reading them. The reader was left more certain than ever that her life was doomed.

There were no mysteries with lesbian detectives. No romances with happy women choosing lives together. No warriors, no princesses, no heroes (only villains). No literature that could be discussed in polite society.

Then, out of a hotbed birthed by the early feminist and gay liberation movements, the Stonewall riots, and the meetings of notable minds who networked by letter because no one could afford phone calls, there was an explosion of lesbian books. In the middle of that explosion, and going on to survive the rigors of publishing the longest, was Naiad. Naiad published poetry, literary works and, thank goodness, popular fiction. Finally, lesbians could see themselves in books. Deserving happiness. Deserving respect. Deserving futures. Deserving to live.

Naiad was founded in 1974 in part because Barbara Grier believed that words matter and books are forever. She had a lifelong commitment to making lesbians in books visible. She did this with her own early lists of lesbiana where she detailed any book with lesbian content, no matter how minor. She did this by publishing books that, as Naiad’s submission guidelines read, included lesbians who were “superior at once.”

By 1989, when I was first published by Naiad, I became a third-generation lesbian writer, one of hundreds who had found the books and a literary tradition that inspired their own creativity. I was one of tens of thousands of women who waited for the Naiad mailing, every month, because it was the only validation of our lesbian identity we could safely receive.

I don’t know anyone who met Barbara Grier and was left feeling tepid. All the writers who knew her have at least one Barbara Grier story, most of them good, some of them negative. She had some very public disputes with other very strong women. She was nevertheless a savior to isolated lesbians all over the world, many of whom feel intense gratitude. I have no doubt that books save lives and Barbara and Donna put books into the lesbian universe at a rate no one in that era matched.

Since publishing this blog I’ve recalled the first time I met Barbara. She always did remind me of my grandmother, that is, until one of her inventive and pithy curse words crept into the conversation. At a book event in San Francisco I shyly introduced myself first to Donna. Donna boomed my name, shook my hand and then Barbara exclaimed, “It’s the young California phenom!” And she laughed that famous half laugh-half giggle that I learned over time expressed her delight.

She loved books and all things to do with them. My dealings with Barbara were always cordial. She called me at 7 a.m. when I wasn’t really awake, and I said “Yes, Barbara” and “Where do I sign?” Ergo, we got along famously.

I can’t imagine my life not having intersected with Barbara Grier’s. Her impact on me is in my warp and weft, from the first lesbian books I read to conversations we shared, though they weren’t that many. I wish her all good speed to wherever her force of nature energy goes from here. Wherever that may be, it will never be the same.