The sky is slowly lightening outside my hotel room window. It’ll be a while before it can compete with the marquees on Times Square, which run all night and day with blazing neon and massive LED displays. One of the marquees is the iconic Coca-Cola sign. A while ago I noticed it wasn’t red and white, and wondered if gray and white were colors for the Witching Hour. Then I saw that “inside” the sign were animated workers doing amusing clean-up tasks. I wondered how many people were awake to see the fun. 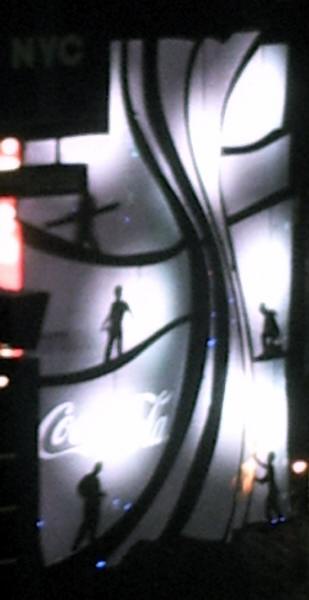 Just across the way from my window at least one floor of the building is a gym. There are rows of treadmills. Nobody using them right now. It’s all mesmerizing and wonderful. New York and there are still people on the streets. Some of them, however, are on their way to work, not still awake from the night before.

Thinking about a project from that long ago has driven away sleep as well. I’ve been thinking about The Kiss that Counted. I even read blogs here to remind me what I was doing when I wrote the book. I’m thinking about the book because earlier tonight (I haven’t yet slept, so it’s not “yesterday”) it became my second Lammy-winning lesbian romance novel. I feel a little bit Sally Field. (That I promptly won a third Lammy five minutes later for the joint project In Deep Waters 2 written with Radclyffe, put the entire evening into a different sphere of experience, especially after I got a second hug from Kate Clinton.)

Mostly in The Kiss that Counted, I remember the llama spit. Not something that comes up often in lesbian romance, but I do always fear writing the same book twice, and something like llama spit as a plot element helps me avoid that.

But I also remember that I wanted to explore what happens when someone hiding from the light meets the sun.

The Coca-Cola sign is still gray and white. I think the sun might be on the verge of rising. It’s nearly the solstice, after all. And I think about what I wanted to write in my novel and realize that’s not the final resolution of a book, what I wanted to put on the paper. The final resolution is how that book was read. Ultimately, though I write to please myself, it’s all about the readers. 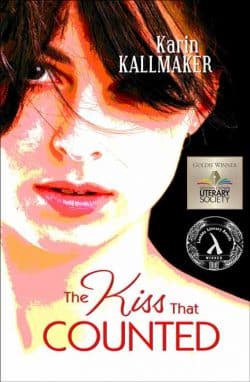 When I accepted the Lammy, I paid tribute to Katherine Forrest. She edited my first book back in 1990, and The Kiss that Counted was the first book of mine she had edited in all the years since. And look where I was standing. She took me seriously as a writer and I have tried ever since to be worthy of her faith and gracious handling of my newbie author ego. I think I might be getting there. Certainly, I will go right on taking her advice!

I also thanked my publisher, Linda Hill and Bella Books. In my second acceptance speech, I thanked KG MacGregor for kicking my butt when necessary (KG’s good at that butt-kicking thing) because KG was there, and I like to thank the people in the room.

I didn’t thank my readers. Few of them were in the room, and those that were attended as writers and colleagues.

The Coca-Cola sign is back to red and white. They changed the design. There are some cartoons rolling up and down the can.

I’m finally to the point of this blog, too – I want to thank the people in this room.

Without you, there would be no point to writing. No point to striving every book to write better so that you never feel you wasted any time or money on a book. I’m going to keep writing until they pry the keyboard out of my cold, stiff hands. Meanwhile, someone’s on the treadmill. I think I should take that as a suggestion that I have a treadmill to return to myself – but not before some sleep makes “earlier tonight” into “yesterday.”