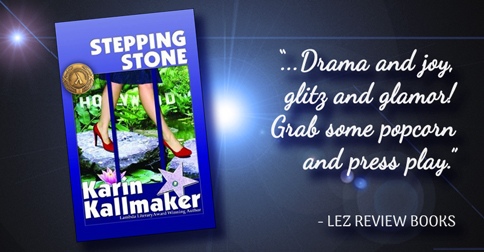 I’ve been so busy writing for the past while that I simply didn’t have time to do the blog I’d planned as a follow-up to questions I posed at the Bella Forum and on Facebook.

So in lieu of a pensive blog posting I thought I’d offer up a sample of what I’ve been working on – Stepping Stone. Hopefully, even though it’s unedited, it will speak for itself. This excerpt is from what is currently Chapter Two.

From Chapter Two
At the bottom of the last hill Selena’s stomach growled right on time. Her favorite diner was brisk with customers, but a shallow booth tucked just around the corner from the counter was still empty. It was her preferred place to sit, her back to most of the diner, and the waitress usually served her as quickly as counter service.

There was no sign of the owner—Betty? Maybe she was on vacation. The new waitress from the other night was there, as well as a wiry Latina at the counter she knew by sight. The newbie got to her first, scribbled the order of English muffin, no butter, grilled chicken and vegetable-of-the-day onto a crumpled tablet. The new waitress had no name tag, and she smiled to herself thinking of one of her favorite writers who would come up with a pithy name for the walk-on. Delilah never stopped at Waitress 1 and Waitress 2, descriptions that casting directors hardly found inspiring. The wry Latina would be Arched Brow and the newbie…

She hesitated, studying the woman. Thirty, maybe, unmemorable except for a bad haircut and narrow hips that made her shoulders look broad. In profile the tight wrap of the apron underscored a flat tummy, but the unflattering uniform made her arms seem too long for her frame. Delilah might opt for Scrawny.

A moment too late she realized that the waitress had become aware of her steady appraisal. She crossed the diner to ask, voice neutral but shaded oh-so-subtly with annoyance, “Did you want something?”

“No, just staring into space.” Selena knew how to fight down a blush, and she was successful now.

“Your dinner will be right up,” Scrawny said, before turning neatly on her no-slip soles to return to her other customers.

Trying to recover from having been caught staring, Selena surreptitiously unwound the ankle weights and set them on the seat next to her. Her Blackberry vibrated on the table, but a quick glance revealed the message as spam. She set it down, feeling a little odd that after such a busy day no one needed her for anything. She could unwind over her comfort food, then head home to read scripts, feet up on the sofa. Add a glass of red wine and perhaps a Goldberg Variation or two.

She realized that Scrawny was approaching with two plates balanced along one arm, and two of the diner’s ubiquitous caddies of condiments in her free hand. She paused long enough to deliver one plate and caddy to another table before continuing toward Selena.

It happened so quickly that Selena had no time to react. The waitress’s non-slip sole stubbed on the floor, refused to slide of course, and the plate of food and caddy continued forward, right out of the woman’s grasp. Selena was still at the point of saying to herself, “There’s relish, mayonnaise and chicken in my lap,” when the waitress finished falling.

Selena amended her shocked list: She now had relish, mayonnaise, chicken, and a waitress, face down, in her lap.

The waitress said, “Shit. Damn it, I’m sorry,” as she finished her fall by rolling back off Selena, ending up on her butt right next to Selena’s feet.

A part of Selena formed the words, “Are you okay?” But that part didn’t get to her mouth first. Instead, she said, “I hate mayonnaise.”

“I’m not loving it right now either.” The waitress clambered to her feet while fishing napkins out of her serving apron. She mopped at the mottle of mayo and relish on her face, but did nothing for what was in her curly blond hair.

The “meet-cute” for Selena and Gail isn’t quite over, but the role of mayo is.