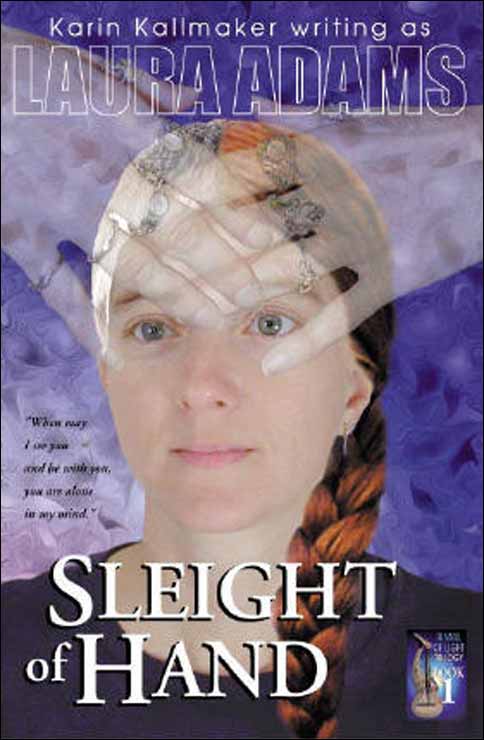 …she met the woman of her destiny: the fire-haired woman who sends Autumn back to her dying body and thereafter mysteriously haunts Autumn’s dreams. Getting by with sleight of hand and other quick-fingered magic tricks, Autumn has no memory of her life before the age of 17. In the years since only an medieval choral chant has stirred her memory. Life’s shadows reach for her. But she resists with the power that dances in her hands.

…to join Kelly Dove, the woman she loves. Leaving the protection of a powerful circle that has sheltered her all her life, she is immediately exposed and threatened by a hungry darkness that craves something only the naive Ursula can give. Weakened and afraid, she finds unfaltering strength in Kelly and other women who are compelled to awaken the power in Ursula that can save them all. But she also finds Autumn in her dreams. Dreams that promise passion but may also lead to oblivion.

What dark future does the distant past hold?

Dreams lead to nightmares. Autumn sees the faces of women she might know, women who have always stood by Ursula. But if her nightmares hold true, only she can save Ursula from the centuries-old darkness that made her a legend.

The Tunnel of Light Trilogy was inspired by the mysterious legend of St. Ursula and the 11,000 Virgins, and further by the passionate liturgy dedicated to St. Ursula by Abbess (and sometime saint herself) Hildegard von Bingen. It was the music that first drew me to the legends of both women.

After acquiring several versions of Chants for the Feast of St. Ursula, my favorite remains the recording by Anonymous 4 entitled “11,000 Virgins.” It was almost always playing while I wrote this book. Jocelyn Montgomery’s “Lux Vivens” is a less traditional rendition, but equally haunting.

Hurricane Katrina completely disrupted the planned third volume of this trilogy. I still plan to write it, but it isn’t currently on any publication schedule.

Several people have pointed out that when Ursula overhears music that sounds – to her English ears – like “God Save the Queen,” she is not listening to “God Bless America.” She is listening to *ahem* “My Country Tis of Thee.” To that I say, well of course she is. But she’s English and is a bit confused. Sure. Yeah. That explains it.

Used copies may be available through the usual online vendors.

What People are Saying...
Excerpt

So much in a single word—admonition, understanding, a gentle reminder of who was who in the cottage where all of them, young and old, had spent most of their lives. A frigid wind rattled the thick windowpanes that were frosted with both a late winter fog and age.

Ursula Columbine was not drinking her tea. She held the thick ceramic mug to quell the urge to clap her hands over her ears and sing “Rule, Britannia” with all the volume of a Women’s Institute Chorus. She was twenty-seven and could hardly argue her right to decide her life’s path while reverting to childish behavior, even if they were still calling her “child.”

As firmly and calmly as she had for the last hour, she said, “I’m in love and I’m going to her.”

“You just think you’re in love.” Aunt Lillidd’s tone allowed for no uncertainty in her evaluation.

Ursula wanted to remind Aunt Lill that her life as a celibate left her unqualified to judge affairs of body and heart. Still, she said nothing because she could not be swayed so it mattered naught what Aunt Lill had to say. Why argue when the outcome was certain? She would not change her mind.

It was Aunt Kaitlynn who put voice to Ursula’s thoughts. “Oh, Lill, what would you know about it? That’s not a criticism, dear, but you should stay within your field of expertise.”

Aunt Lill sniffed. Beloved Aunt Kait, Ursula thought. She rested her arm on the mantel, letting the heat of the dancing flames soak into her bones. The cold and bitter winter was almost behind them. Crocuses would soon give way to daffodils.

“I, on the other hand,” Aunt Kait went on, “have some small experience in these matters, and I have to tell you, Ursula dear, that you seem far more interested in the subject of love than your lover.”

The tea mug sloshed on Ursula’s smock as her hands jerked. She dabbed the spill with her sleeve and silently recited the first three stanzas of Idylls of the King while Aunt Kait covered in depth the loving, passionate quality that her own many relationships had never lacked. Aunt Kait concluded her lengthy list with, Ursula had to admit, the truthful assessment that she’d become an excellent judge of love, passion, and people.

She wanted to cry. She had thought that of her three aunts Kaitlynn would understand the call of the heart.

“And so I must say,” Aunt Kait concluded, “that while you do seem to have a deep connection with Kelly–whom I like, dear, really I do–I think you’re hasty in believing her to be your ultimate love.”

Ursula smiled without bitterness. “How will we know who is right if I don’t go to her?”

“Don’t be cheeky.” Aunt Lillidd could turn a roomful of schoolchildren to stone with that tone, but Ursula refused to let it have the same effect on her.

“I am going.” Ursula gritted her teeth. They were making her feel seventeen, not twenty-seven. “I am not the only person who can convene a ten-point circle!”

“Of course not.” Aunt Kait gently touched her shoulder. “But you are the best we have. Think what you will leave. Why can’t she come to you?”

Ursula didn’t want to leave them. She knew she had a place in the work the circle did. How could she explain that it wasn’t enough, that it never had been? It would sound too convenient when they knew, just as she did, that she loved the circle. How could she say now that her happy life was also a drifting one? That it was a life chosen for her by others, out of love, but still not her choice? She hadn’t suspected it was so until Kelly had walked into their little store. She belonged with Kelly and had known it instantly. The little time they had spent together before Kelly had gone home had only confirmed the feeling.

“She has a farm and a seed business that is booming. The Internet is a wonderful thing, so she says. She’s as attached to her plants as you are, all of you.” She’d explained this before. Kelly’s similar interests had brought her into their herb store in the first place. She could not explain the inner warning bell that had chimed when she’d thought to ask Kelly if she would consider immigrating instead of the other way round. The journey was hers to undertake—all her instincts said so. “I love you, and I don’t want to leave you, please believe that. Every day I’ll wonder when I’ll see you again.”

“You can’t walk away from your obligations,” Aunt Justine pronounced.

It was too much. The younger woman faced her three judges, who had raised her from birth, bathed and purified her, fed her, loved her and made her one of them.

“Obligations?” Ursula set the mug on the mantel. “I have lived up to a lifetime of obligation—”

“Don’t speak to us of lifetimes—”

“You have no idea what you’re saying—”

“It’s only the beginning, Ursula, dear—”

“Obligations that never ended and will never end.” Ursula’s voice was squeaky with anger. “I no longer believe that is my only purpose. There is something more, I know it. Maybe I have to go find it. Or maybe Kelly is my purpose and she found me. That was her part. Now I must do the rest.”

“Your place is in the circle.” Aunt Lill had that tone of having pronounced the final word.

Ursula tried to soften her words—there was no room in their lives for bitterness. “I was never happier than when I worked the circle with you. At least until I saw Kelly for the first time. Our circle has no room for one more–it has always been ten plus one. What do I tell her? Give up your life, move here with me, and be excluded from the focal point of my energy? Priscilla can replace me, but who would we throw out of the circle to make room for Kelly? It won’t work, you know it won’t.” She looked at each of them in turn. “Maybe I am meant to start over. That is what my heart tells me to do.”

“Your heart is in a flutter over a pretty girl.” Aunt Justine wrinkled her nose over the dregs of her tea.

Ursula considered that Kelly wouldn’t care for the adjective pretty, but remained silent until Aunt Justine looked up to see why she said nothing. “After all your hard work, Aunt, do you really think I am that shallow?”

“I wouldn’t have thought so until now,” Aunt Justine replied.

“Justine, Ursula doesn’t deserve that. This seems black and white to us, but it can’t to her.”

“You coddle her, Kait, you always have.”

“I am not five years old,” Ursula snapped. “You can’t talk about me as if I’m not here. I don’t want to wait around all my life for some unknown thing to happen to me. Have you ever considered that maybe I’m wasting my life waiting when I ought to actually do something?”

“I’m going!” Now Ursula was shouting, and her turmoil did not allow her to see that the other three women had drawn back a hairsbreadth. The small movement would have amazed her, for she had never seen any of them flinch at anything, at anytime. There was no mirror to tell her that her long, red braid glowed with an inner light or that the ends that hung loose below the braid’s final tie stirred as if a breeze blew up from the cold floor. “I’m going. And unless you plan to force one of your special herbal brews on me, you can’t stop me.”

Silence followed. The three older witches regarded the youngest of them, and by virtue of their many years of living and working together and the precedence of age, Justine answered.

“You are right. You are old enough to stop yourself.”

Ursula caught her retort before it spilled out. She calmed herself with a brief relaxing spell and found her balance again. Telling her that following her heart was not the adult thing to do, well, it wasn’t going to work. She was going, as she had known all along she would. She would make the journey to Kelly, to a farm in Paradise, Pennsylvania, USA.

It was a long way from Aldtyme, a small Northumberland seaport, a very long way from all she had ever known. It would mean an airplane—a different kind of flying than that engendered by one of Aunt Lill’s teas. She would miss Aldtyme and her aunts, but Kelly promised hills just as green in spring and people just as stubbornly set in their ways as the close-knit community that had made up Ursula’s world until now. It would be enough like Northumberland to make the homesickness bearable, Ursula thought. And Kelly would be there. Love would be there.

The day after the vernal equinox, when spring began to brush the moors with the silvered purple of heather, she went.