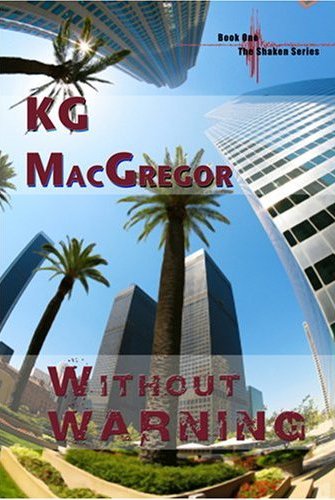 This week it’s K.G. MacGregor’s turn to reflect on the woes of editing an earlier version of her work. Without Warning, the first of the Shaken series, is already sitting pretty at the top of lesbian fiction and lesbian romance best seller lists–she must be doing something right! – Karin

I’m delighted that Karin has asked me to blog here on her new (and so very user-friendly) site. Alas, I will not be sharing a recipe. If you knew what passed for cooking at my house, you’d be grateful for that. I do not cook. I prepare food for sustenance. It is usually edible, sometimes tasty, rarely savory and never remembered (after the first several hours).

Actually, we had already agreed on a blogging topic: Self-Flagellation and the Updated Edition. As you probably know, Karin posted last week over at my house. She likened her exercise in re-editing Christabel to a “humility lesson.” But as I read her comments, I couldn’t help but be jealous that clichés, conjunctions and sentence fragments were her most egregious sins.

I’ve recently undertaken the task of revising my first published book, Shaken. The story had four—count ’em, four—distinct story arcs. Michener’s got nothing on me. After a conversation with publisher Linda Hill, I set out last summer to tear it apart, hone the characterizations and expand it into three books. The first, Without Warning, was released in January.

If my work is someday displayed in a writer’s museum, the Shaken years will likely be called my “Democratic Period.” I was determined that every single character in my book deserved to have a voice—even the dog. My new editor at Bella said no. She said no to lots of other things too, and by the time the book was finished, barely a line was left untouched.

It was, as Karin said, a humbling exercise to revisit that early work. I’m very glad I had the chance for another go, as I’ve always felt Shaken was my signature story, but I don’t plan to make a habit of it. Writing is a lot more fun than rewriting.

Thanks very much to Karin for sharing her space and to you for reading all the way to the end. Peace & chocolate. — K.G.