Though there are great reasons to use a pen name, mostly surrounding marketing and branding, my reason is more pragmatic: my birth name is difficult to pronounce and spell. Complicating matters is that I no longer use my birth name as I’ve taken a legal name to share with my partner and our children.

I suppose if we had actually had a wedding, I wouldn’t feel a bit like a fraud if I say “maiden” name. But we decided long ago that while we’ve participated in group commitment ceremonies we weren’t going to do a “wedding” until it was legal.

But we also decided that nothing was going to prevent the two of us (which grew to be the four of us) from being a family. And one of the ways a family tells the world to treat them like a family is to share a common surname. Her last name was Polish, lacking in vowels and also impossible to pronounce correctly. No way were we going to hyphenate!

Blending Names, Wherein I Finally Get a Descender

We blended the K from my name, the A from both and the J from hers. The J in particular because it is a descender, because in all the twenty letters of my full birth name, there wasn’t a single descender and I envied her that J.

So I have a “maiden” name and a “married” name if I think about it that way. But I clarify each as my birth name, legal name, and pen name.

Adopting a “married” name got pretty confusing because I already had two last names: the one I was born with (long and German with silent letters) and a pen name (Kallmaker). All my life I’ve had to explain how to spell and pronounce my last name, and occasionally my first name. Karin with an “I” is a not-so-common variation of Karen, which is a variation of Katherine which means “beloved.” (This appeals to the romantic in me.) That my last name is a product of the patriarchy has never bothered me as a feminist. My father gave me half my chromosomes and my mother chose my first name. My dad’s last name is distinctive – people might forget me, but they always remembered the name.

They remembered it, but no one ever pronounced it quite right. The variations on junk mail were often amusing: everything from Kamelwisher to Koalamaker on mail. There were times when I envied the simplicity of my mom’s British maiden name.

According to my mother’s mother, our family descended from English Howards and Boleyns who found it prudent to leave Britain after two daughters of their house were executed by Henry VIII. (This of course appeals to the romantic in me.) They moved to the continent, adding some French and Swiss to the English-Scots-Irish blend. There’s some Welsh in there too, but at a far less degree than the 1/64th Wyandotte added as the family moved across the American continent. Add that to the mostly German blood of my father and I’m truly Heinz-57, an American mutt.

Less romantic is a historical note from my father’s line. During his forays into genealogy research, he found various records that are probably from the first immigrant to the USA in the 1850s. It looks like That Guy got put ashore off a slave ship, leading us to ask each other, “What kind of miserable human being do you have to be for slavers to find you bad company?” Lest we think perhaps he was too decent for the slavers or running some kind of Underground Railroad, That Guy was discharged from the Confederate Army. So, yeah, there’s that. Nothing romantic about it.

I first considered the problematic aspects of Kawelmacher as an author’s name when I got the call from Naiad Press asking me what name I wanted to put on my first book, In Every Port. At the time I was very closeted and suggested “Kaye.” (It had a descender Y, too!) Barbara Grier at Naiad replied that Karin Kaye sounded like a pseudonym and she wanted Naiad’s readers to feel that the authors were the genuine article. I didn’t want to put my birth name on the book; it was unique and I just knew someone would out me to my family. (As if the rest of the world had nothing better to do. Yes, I was young once.) 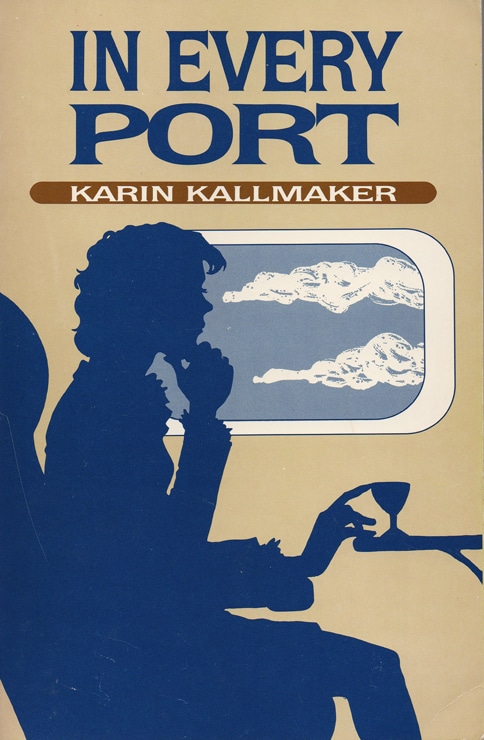 We needed a practical compromise. How could bookstore clerks suggest me to customers if they couldn’t say my name, I reasoned. So I suggested a phonetic compromise: Kallmaker. (Goodbye descender, and all these years I imagine graphic artists have wished my long name had a descender they could work with on covers.) Anyhoo, Barbara agreed and ever since I’ve been Karin Kallmaker on any project that wasn’t related to my everyday life or my job. Karin Kaj is my legal name and I’m “KK” to my friends.