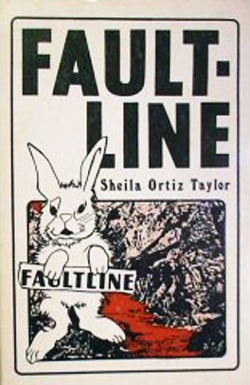 So when I woke up this morning I didn’t know it was a Fabulous Friday for me. But all the portents were pointing to it when I saw that the number of registered users of the new Bella/Spinsters Author’s Forum continues to steadily rise, even ahead of our major publicity.

Then Ruth Perkinson set up the first Potluck discussion and conjured the image of Meryl Streep, Alison Janney and Amy Ray around the same campfire. It’s the sort of image that leaves a girl breathless, and not just because they are all unusually beautiful women, though that doesn’t hurt. They’re all intelligent and articulate about their work and I could listen to each for hours.

Then Spinsters Ink author Sheila Ortiz Taylor registered at the Forum. One of my early influences was “in da house!” I had my usual fangrrl reaction of extreme inarticulateness, then I brandished my first edition Naiad Press copy of Faultline at the monitor, saying, “See? See?”

If you could actually see the book, you’d see the unmistakable cover art by Tee Corinne. An opening line of

“I realize that my three hundred rabbits are the most
serious piece of material evidence against me.”

But when I was a young lesbian, and this was one of the first novels featuring lesbian characters that I had ever read, what I saw was a couple of pages inside: a large photograph of the author, with her real name.

It was the first time I’d ever seen such a thing. I’d seen news articles with pictures of lesbians of course, but this was a voluntary photograph, taken in a moment of smiling, content leisure. With her name. Proud. Open. Unabashed. And my little (as yet unbeknownst to me femme) heart went through many painful thumps, realizing that such a step could be taken.

A woman could publish her photograph and put her name on it and say “I’M A LESBIAN” – and survive.

I wanted to be a writer, and I accepted, whilst looking at Sheila Ortiz Taylor’s photograph, that some day I would have to be that brave.

These many years later it seems adolescent, the fear I had back then of being out, of being seen. Now my picture’s all over the place; I can’t imagine being any other way. But the only reason my world is so open is because women like Sheila were there first, way ahead of me.

My Fabulous Friday continues with the realization that I — and the many other writers represented by Bella Books and Spinsters Ink—are under a big umbrella with an incredible legacy. We reach back into the roots of our literary history. I’m doing my best to reach forward. The expanse of the territory we cover is breathtaking —as big as our collective imaginations, and then some.