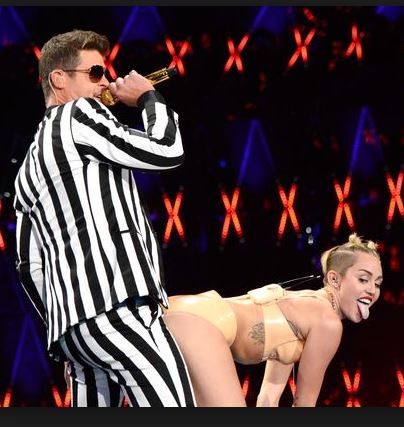 I’ve seen a lot of (hilarious and thoughtful and mean and deserving) commentary about the Miley Cyrus VMA performance that tried to be performance art a la Madonna or Lady Gaga and instead was a train wreck of bad trashy sexual dancing with oversized children’s toys that sent a strange and unsettling message. It was supposed to shock and it did. Time will tell if it’s in the way that Cyrus and her handlers intended.

To those who are particularly outraged at the sexually charged part of Cyrus’s performance, heaping on lots of disgust for her tongue-wagging, butt-grinding and fetish attire as if she’s 13 and not 20, how about some shame for 36-year old Robin Thicke? Why aren’t his taste, artistic integrity and morals up for ridicule?

I would guess that in the last 24 hours there has been more condemnation for crotch-fondling heaped on Cyrus, however, than on Jackson in total of all his years of performing. One could argue that in Jackson’s case he had talent and Cyrus not so much, but low-talent male performers crotch grab on the VMAs as well and it’s not a national headline.

That the performance was tacky and tasteless is, to me, undeniable.  But there’s a double standard in criticism of art and I’m pointing it out. Is Cyrus blameless? Of course not. She was the headliner – it was her number. But there are TWO PEOPLE in this photo and only one is being slut shamed and labelled “disgusting,” “desperate,” “disturbing,” and questioned about whether virginity was compromised.

Additional comment: Someone has passed on that it’s reported this segment was suggested by Thicke. So the double standard of the shame game being wholly heaped on Cyrus is even more so. Thicke is a cool bad boy and Cyrus is a disgusting, desperate slut?