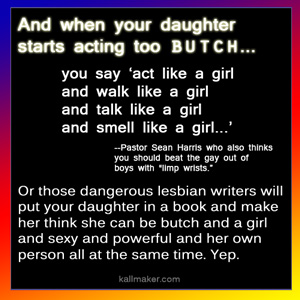 So in addition to thinking you should hit your son if his wrist is “limp” so-called Pastor Sean Harris thinks you can get the butch out of your daughter by making her into his idea of what a girl is.

Apparently he knows one if he smells one.

So another dangerous missive from this lesbian writer, who seriously needs to be boycotted by One Million Moms and the American Family Association and any “man of God” who thinks like Sean Harris.