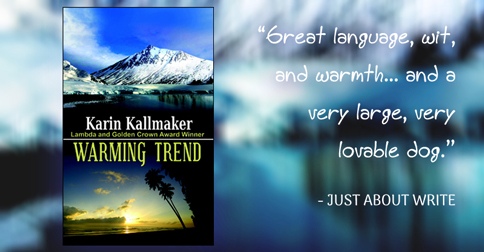 Kallmaker has given her fans a beautifully written novel, complete with breathtaking descriptions of Alaska. Hers is not the Alaska of the cruise lines, but the heart of Alaska, with particular attention to its glaciers, ice, and northern lights. Anidyr Bacall is the daughter of a Russian immigrant. Her father was a glacial geologist, but one without American credentials. Anidyr’s lifelong dream was to be a glacial geologist, complete with a doctorate.

Eve Cambria lives and works as a caterer in North Pole, Alaska. Her lifelong dream is to own a restaurant. When Eve and Ani meet, they both instantly realize they have met the love of their life. Their happiness is almost palpable. After one short year together, their world is turned upside down when Ani is publicly and academically disgraced.

Warming Trend is the story of a diabolical plot and how two friends, Lisa and Tan, work with Ani and Eve to clear Ani’s name and to literally uncover the truth. It’s also the story of academic politics, and the mind games that are played by some professors.

Kallmaker has given her readers wonderful characters. She has built her story around them and around the beauty and wonder of Alaska. She has told her story with great language, wit, and warmth. She’s even included a very large, very lovable dog. If you’re a Kallmaker fan, or if you’re new to her work, Warming Trend is not to be missed.

R Lynne for Just About Write