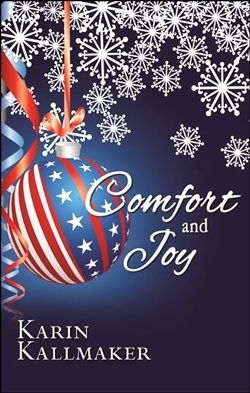 Home from Afghanistan to surprise her mother, Milla doesn’t expect more than the best apple pie in the world and the bliss of unrationed hot showers. She’s not counting on futures—or meeting a woman like Tyna.

Available exclusively from BellaBooks.com, Comfort and Joy is about the fragile beginnings when differences obscure similarities. I began it almost immediately after submitting Love by the Numbers (which is now on my desk again for its final edit before its February release). At first this story was made up of a young woman mourning the death of a former girlfriend and questioning what it all means. But then she sees an angel…who turns out to be a quite ordinary woman. As I always try to highlight in my stories, ordinary women become extraordinary in love, be it love for another woman, for their families and for those they care about.

To give you a small taste, here is the opening. Thank you to my Facebook friends who pointed me the right directions for research. All mistakes, of course, are mine. I also want to thank all of you readers–in terms of writing, this was a challenging year. It ended with a positive bang and your support has meant the world!

Chapter One
One thing Milla appreciated about cemeteries was that people left you alone. She pulled off her gloves to enjoy the cool whisper of the powder fine snow against her fingertips. Skiers called it champagne—so soft and light that falling in it was almost fun.

Gracie had liked skiing, though she’d only gone once.

There was a funeral underway not far from where she squatted next to Gracie’s headstone. That was tough, a funeral on Christmas Eve. Two people had walked past her on their way to the service, but given her a wide berth. She thought it was probably out of respect for the setting. Realistically, it might also be that they were disquieted by her desert Army fatigues. They weren’t what folks were used to seeing in snow-covered Ohio.

Gracie and she had officially parted ways when Milla had decided to enlist. Gracie couldn’t stand the thought of a “military thug” for a girlfriend. That a four-year enlistment was the only way Milla would ever see a college education hadn’t mattered to Gracie. For her part, Milla couldn’t stand the thought of a drug addict for a girlfriend, and Gracie’s using had gone from once in a while at parties to almost every day. Though they each thought their own reason was the better one, they still added up to “It’s over.”

Two years more of living in the pipe, flying without wings and—if gossip were to be believed—selling love to pay the dealer had wasted Gracie to nothing. The last photograph of her posted on her Facebook page had been taken about three months before the news of her death. It had shown an unsmiling Gracie as powdery and crumbling as the snow Milla was sifting through her fingers.

The blare of a horn and the sound of screeching tires brought her head up. There were no noises of impact or further alarm so she forced herself to relax. Through the trees and iron fencing she could see the streetlights on the busy boulevard wrapped in candy cane stripes. It was hard to believe she was home. Youngstown, Ohio, wasn’t a big city but it wasn’t a small town either, so it tried to be both. It succeeded about as well as anything did when you couldn’t make up your mind.

Bagram air space had been jammed up with dignitaries arriving to visit troops for the holidays, and she’d nearly missed her connecting flight out of Kuwait. Thankfully, she’d slept like a baby for five hours and managed to wake up for the double-time race to make the transport from Andrews to Letterkenny Army Depot. She spared a kind thought for the glorified bus drivers who’d held the flight so that she and five others grunts would be on the ground in Pennsylvania in the wee morning hours of Christmas Eve.

It had been a short, rough flight in gusting winter winds, but nothing like a chopper ride in a dust storm. She’d been met at Letterkenny by Judy, her buddy Brent’s mom, who had brought hot coffee and an Egg McMuffin at four o’clock in the morning. Real eggs, even fast food, had tasted like heaven. Her stomach, still on Afghanistan time, had been super pleased about every bite.